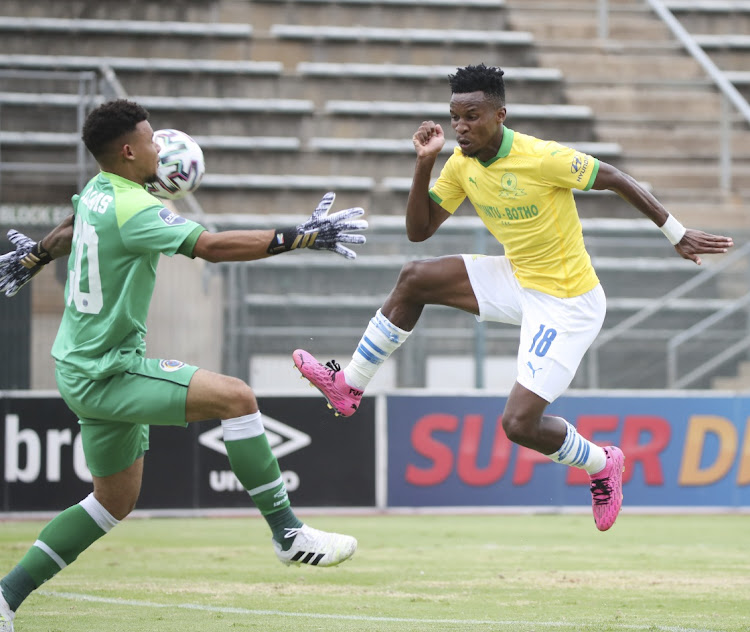 Themba Zwane of Mamelodi Sundowns and Ronwen Williams of SuperSport United will go at each other during the Tshwane derby on Wednesday at Loftus.
Image: Gavin Barker

Mamelodi Sundowns' impressive defensive record will be put to the test when they take on SuperSport United in the Tshwane derby at Loftus on Wednesday.

United, who have on-form Thamsanqa Gabuza and Bradley Grobler in their attack, are among the top scorers in the DStv Premiership with 15 goals after 11 matches.

To get the better of the Brazilians, Gabuza, Grobler and the rest of the attacking line will have to do what no other club has done in 13 matches where Sundowns have not conceded a goal in the league.

Ironically, United was the last team to score against Sundowns in May when Bafana Bafana midfielder Teboho Mokoena netted a late consolation in their 3-1 defeat.

Ahead of the visit to their neighbours, United captain Ronwen Williams said they will be looking to return back to winning ways after they lost 2-1 to Marumo Gallants.

“They are the champions, they have done well throughout the season and they haven’t conceded a goal. It shows that the work they are putting in on the training ground is working for them.

“In saying that we are going there to fight, we have our own ambitions and targets that we want to achieve as a team and we want to return back to winning ways.

“We let ourselves down in our previous match by losing at home to Marumo Gallants but we want to go out there and rectify those mistakes and give a better account of ourselves.

“We are not going to make it easy for them, we are going out there to fight because we need to get points on the board and close the gap. They are on top and we want to close that gap.”

Sundowns attacker Haashim Domingo said they are up against a capable team who are strong in the midfield.

“I think the midfield will be key because they have creative players like Teboho Mokoena and Sipho Mbule and up front they have Gabuza and Grobler who comes with the aerial presence.

“We are just taking it day by day, we have analysed them, we know what they bring to the party and we just have to come up with solutions of how to counter them.”

Domingo, who was named the match-of-the-match after the draw against Cape Town City at the weekend, wants to keep on improving.

“For me it is just to continue where I left off in the match against Cape Town City in terms of fitness. I want to build on fitness and confidence going into the next match.

“It is important that we get the result in this one against SuperSport. I am expecting a direct game from them in terms of long balls and playing on the second balls. I think we need to stay tight and pick up the second balls and establish play from there.”

Williams went on to say that they were disappointed by the surprise loss to bottom of the log Gallants last weekend.

“We are coming off a very disappointing result at home, we are disappointed with the whole outcome of that game because we didn’t apply ourselves like we can.

“The performance and the effort wasn’t there and we got what we rightfully deserved which was defeat, we have a lot of things that we need to fix from that match.

“We have spoken about it, analysed the match and we know that the effort wasn’t that good and we need to fix it otherwise we will be smashed in our next game against Sundowns,” concluded Williams.

Mamelodi Sundowns co-coach Manqoba Mngqithi has admitted their record-breaking run of 13 matches without conceding a goal in the DStv Premiership is ...
Sport
6 days ago

Holding Mamelodi Sundowns to a draw these days can be worn as of a badge of honour, and Cape Town City have done it twice in regulation time in two ...
Sport
1 week ago