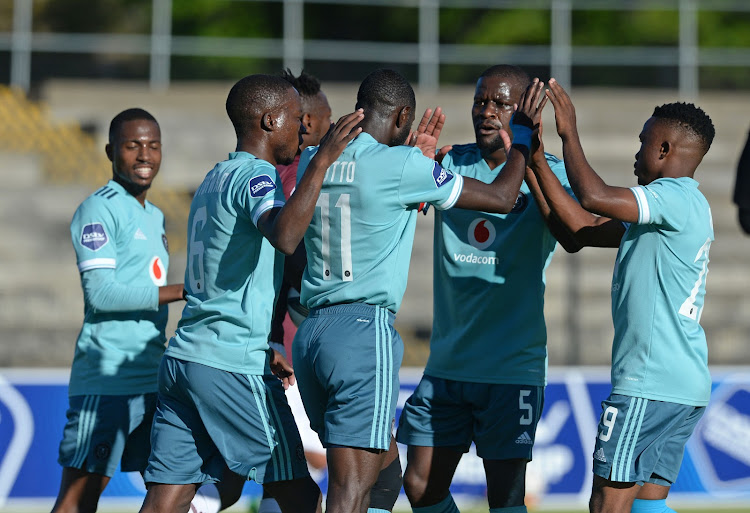 Deon Hotto celebrates with his Orlando Pirates teammates after scoring one of his two goals against Stellenbosch at the Danie Craven Stadium in Stellenbosch on Wednesday November 24 2021.
Image: Ryan Wilkisky/BackpagePix

If Orlando Pirates’ inconsistency is anything to go by, May 2022 will mark exactly 10 barren years since they last won the Premiership title.

Despite an emphatic win, a 3-0 thrashing of Stellenbosch to end a 12-match unbeaten run for Steve Barker’s Stellies on Wednesday evening, the Buccaneers have been so inconsistent that only a reckless gambler would put money on them beating leading defending champions Mamelodi Sundowns to the 2021/22 DStv Premiership title come May 21 next year.

Collins Makgaka scored his first goal in two years to put Pirates ahead early in the first half and Deon Hotto doubled the lead shortly after before completing his brace with the Buccaneers’ first attacking move in the second half.

Orlando Pirates’ co-coach Mandla Ncikazi came up with an extraordinary description of his side's struggles in the DStv Premiership this season after ...
Sport
1 week ago

Despite the three points in the picturesque winelands, Pirates remain seventh and nine points behind unbeaten leaders Sundowns, who conceded their first goal in more than 20 hours of football as they were held to a 2-2 draw by city rivals SuperSport United at Loftus.

Sundowns are still unbeaten and the point saw them open a six-point lead over second-placed Stellenbosch at almost halfway through the campaign, and Pirates and any potential challengers will have their work cut out to overtake the rampant champions.

Stellies, the surprise package who were fighting for their lives in the relegation battle just six months ago, struggled to get out of the blocks and never recovered from their defensive blunders that led to all three goals.

SA football will not strengthen its culture if it does not give more opportunities to qualified coaches from within the country, and while clubs ...
Sport
6 days ago

Having not lost a match in 11 outings, the high-flying Stellenbosch got the wind taken out of their sails and looked deflated after a lapse of concentration saw them concede two quick goals in the first half.

Pirates have not won back-to-back Premiership matches in a week this season since September when they beat Swallows and Chippa United and travelled to Stellenbosch on the back of a single win in seven league games.

They started with back-to-back draws and followed up with the wins over Swallows and Chippa two months ago but have since struggled to accelerate.

The Buccaneers will feel that they probably deserved more than they got in the 13 matches they have played, but a run of just four wins, two defeats and seven draws has seen them fall behind the chasing pack early in the season.

As part of empowering the girl child, improving women’s club football and advancing its professionalism on the African continent, the Confederation ...
Sport
1 week ago

It is not a run of form that inspires confidence to the Ghosts that Pirates will rekindle the memories of May 2012 when they won a second successive league title, but this win will at least rekindle hopes that the Buccaneers can mount a strong challenge.

The win will also give the Pirates players a spring in their step as they travel to West Africa to face Liberia’s LPRC Oilers in the first leg of their Caf Confederation Cup playoff round in Paynesville, outside Monrovia.

Pirates will return home hopefully with a positive result and look to build momentum and further climb the table when they host struggling Baroka at Orlando Stadium on Thursday December 2.

As the nation continues to wait for the Fifa disciplinary committee to announce its decision on the tense dispute between SA and Ghana, it has ...
Sport
6 days ago

France and Real Madrid forward Karim Benzema was found guilty of complicity in the attempted blackmail of a former international team mate over a sex ...
Sport
6 days ago

Pitso Mosimane furiously lashed out at a member of the Egyptian media when questioned about bringing on Mozambican forward Luis Miquissone late in Al ...
Sport
1 week ago