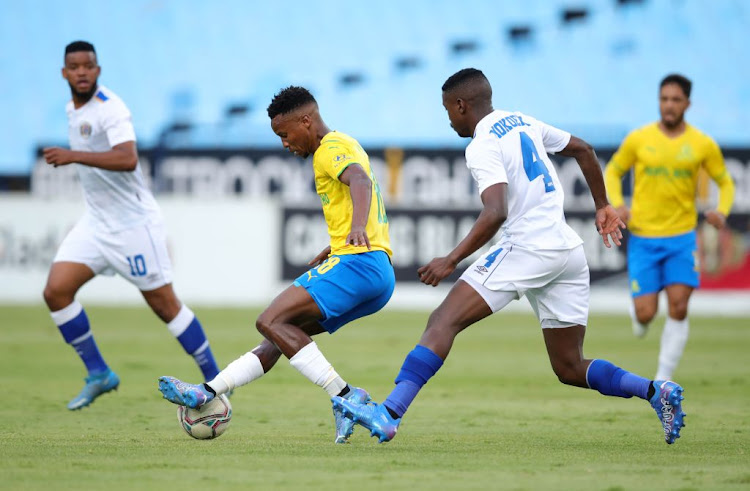 SuperSport United launched a spirited second-half fightback to force a 2-2 draw with Mamelodi Sundowns during an exciting Tshwane derby at Loftus on Wednesday evening.

The Brazilians were cruising through well-taken goals by Neo Maema and Peter Shalulile when United staged the comeback with late goals by Gamphani Lungu and Teboho Mokoena.

Maema, who produced a virtuoso performance during the first 50 minutes of the match, opened the scoring with a stupendous long-range curler on the stroke of half time.

He returned more inspired from the break to provide an assist for Peter Shalulile, who beat United goalkeeper Ronwen Williams with a thumping shot from close range as Sundowns took control.

But United, who suffered a surprise loss to bottom of the log Marumo Gallants last weekend, responded with Lungu and Mokoena to salvage a much-needed point.

Lungu’s goal was significant as it stopped Sundowns’ record-breaking 13-match run without conceding and the irony is that Mokoena was the last player to score against the Brazilians, in May last season.

But even though the two teams  shared the spoils in this match,  where goalkeeper Denis Onyango did not cover himself in glory between the sticks, Sundowns still remain unbeaten and have opened a six-point lead at the top of the table.

Sundowns will be looking to return to winning ways when they host rookies Sekhukhune United at the Tuks Stadium on Saturday, while United have a break as Orlando Pirates are in Caf action this weekend.

The Sundowns coaching trio of Manqoba Mngqithi, Steve Komphela and Rulani Mokwena made three changes to the team that drew 0-0 with Cape Town City last weekend.

Lyle Lakay came on  for Lunga and on the attack, Maema replaced Thapelo Morena, while Pavol Šafranko took the place of Thabiso Kutumela upfront.

Visiting coach Kaitano Tembo made two changes from their shock 2-1 loss to Gallants with Keenan Phillips on for Buhle Mkhwanazi and Sipho Mbule for Bradley Grobler.

United nearly got off to a flying start when a shot by Thamsanqa Gabuza found its way between Khuliso Mudau and Grant Kekana before it bounced off the crossbar.

Shortly before the half-hour mark, the upright was rattled again and this time it was the effort of Shalulile who struck the woodwork after he received a defence-splitting pass from Themba Zwane.

On the stroke of half time, Maema opened the scoring with a long-range curling shot from outside the box that left Williams rooted to the ground as it flew into an empty net.

Three minutes after the break, Sundowns increased their lead when Maema produced a clever chip pass, his fifth assist of the season, to Shalulile for his ninth goal of the season.

Sundowns were finally beaten by Lungu whose left-footed shot sailed into an empty net and Mokoena equalised with a long-range free kick 10 minutes from time as they settled for a point.