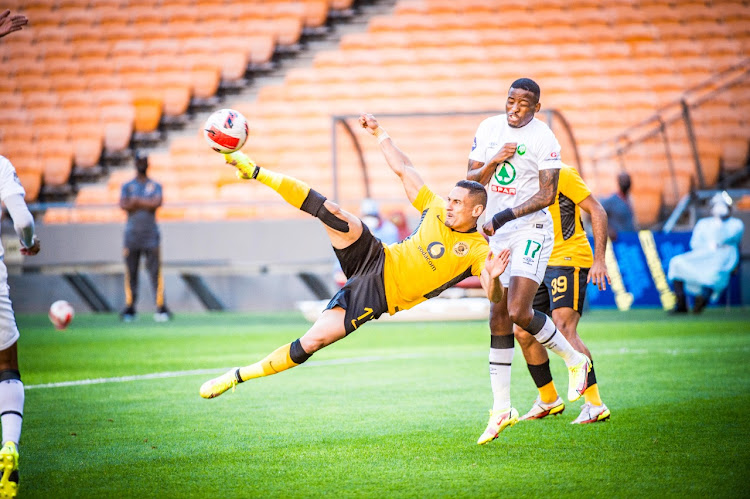 Ten-man Kaizer Chiefs allowed an opportunity to reduce Mamelodi Sundowns' imposing DStv Premiership lead slip though their hands when they spurned a lead at FNB Stadium to draw 1-1 with AmaZulu.

It was a Wednesday evening where two teams spurned opportunities to land early psychological blows in the title race. Sundowns led 2-0 against SuperSport United at Loftus Versfeld, but drew 2-2.

Chiefs had a chance to jump to second place with three points thanks to Orlando Pirates inflicting a first league defeat of 2021-22 on Stellenbosch FC (3-0) at Danie Craven Stadium.

Amakhosi had a relatively firm grasp on protecting their lead after Keagan Buchanan's 20th-minute own goal. Cole Alexander's red card for a second bookable offence in 60th allowed AmaZulu coach Benni McCarthy to throw on attackers. Usuthu duly equalised through Bonginkosi Ntuli's strike in the 77th.

With the scores level, the number of players on the field equalised too when AmaZulu had centreback Samkelo Mgwazela sent off, also for a second bookable offence, in the 85th.

An awkward lunge on the intercept leading to Buchanan's own goal, and reward for percentage football, optimising how they capitalised on the moments where they found spaces to inflict hurt, led to Chiefs' 1-0 lead by the break.

As has been their trademark in 2021-22, Chiefs came out slugging to land an early blow.

When they did not, Amakhosi withdrew into a shell. They absorbed pressure in a period where a stray pass from Njabulo Blom allowed Sphesihle Maduna a low drive past the upright, and Thapelo Xoki's punt upfield found the run from Augustine Mulenga, under the attention of Daniel Cardoso, to squeeze a shot at Daniel Akpeyi.

Chiefs patiently waited for the rare moment of Usuthu being caught out of shape, and pounced. Blom's well-weighted pass saw Keagan Dolly down the right who squared in the direction of Kgaogelo Sekgota. Buchanan stretched awkwardly back for the intercept, and could only direct the ball past Veli Mothwa into his own net.

The two teams had chances in either direction from the break.

Defender Mbongeni Gumede's pass from the halfway line was allowed to run by two players to find the Thabo Qalinge's sprint down the left, who struck across the face. Sithebe's low skidding drive was hit with enough power to force an awkward parry from Akpeyi.

Sekgota had space on the left and found Dolly inside to direct at goal, Mothwa stopping off his legs.

Alexander paid for the perils of his midfield enforcer position, trailing a leg to catch Qalinge on the run and receive a second booking from referee Abongile Tom.

McCarthy threw forwards on from the bench to make the numerical advantage count. Sithebe struck the side-netting and two substitutes, Andre de Jong with the cross and Luvuyo Memela with the header over, combined to threaten again.

The pressure counted as Kiwi de Jong was in space on the right again and, with a quick-witted first touch, stabbed inside to find the darting run of another replacement, Ntuli, to finish past Akpeyi.

Kaizer Chiefs aim to claw further up the table against AmaZulu

Kaizer Chiefs will know that they can get themselves back into the title race reckoning if they can get a third DStv Premiership win in succession ...
Sport
6 months ago

Baxter: Kaizer Chiefs ‘can make some noise’ ahead of AmaZulu clash

Amakhosi coach Baxter admitted it was far from champagne football as his team toughed out a DStv Premiership win at Harry Gwala Stadium on Sunday.
Sport
6 months ago

AmaZulu FC defenders Thembela Sikhakhane and Samkelo Mgwazela have not forgotten the controversial 1-1 draw they played against Kaizer Chiefs in a ...
Sport
6 months ago

Kaizer Chiefs coach Stuart Baxter was happy to emerge from Harry Gwala Stadium with all the points in the bag after a power failure moments before an ...
Sport
6 months ago