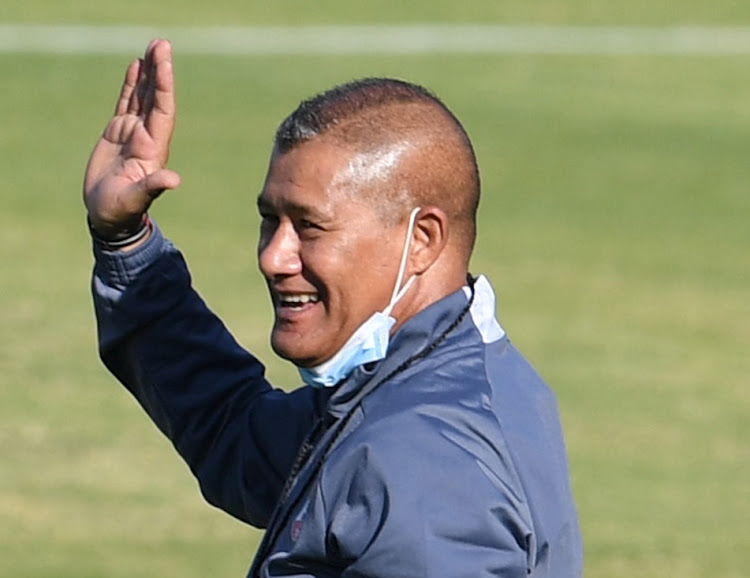 Cavin Johnson has kept his reasons for leaving Al Ahly close to his chest, but has “nothing but praise” for the Cairo giants' revered president Mahmoud El Khatib and the way he runs the 114-year-old club.

Johnson has returned to SA after a rollercoaster year assisting Ahly head coach Pitso Mosimane at Africa's Club of the 20th Century.

The ex-Platinum Stars, SuperSport United and Safa School of Excellence coach says he is in no rush to find a club to coach in SA, and that he wants to find employment where he can use his experience to make a difference improving the country's football.

Johnson has denied a reported approach to join Orlando Pirates as head coach.

In an interview with SAfm, he said: “I didn't come back home because I received offers. I left because in a marriage you start seeing things after some time that you don't like. Then you file for divorce and with a divorce you don't have to reveal the details publicly.”

Asked by TimesLIVE if he could expand on that statement, Johnson replied: “No, I think that's kind of what I said over the radio — you can put that down.”

Johnson, 63, said it was an eye-opener working at the biggest club in Africa until his departure in September.

Mosimane and his largely SA technical staff ended a seven-year drought in the competition Ahly covet most, the Caf Champions League, after the ex-Mamelodi Sundowns coach's shock departure from Chloorkop in September last year.

Taking over from the semifinals, where Mosimane oversaw a 5-1 aggregate win against Wydad Casablanca, Ahly beat bitter Cairo rivals Zamalek 2-1 in the 2019/2020 final.

Ahly retained the Champions League — Mosimane becoming the fourth coach to do so and only second at Ahly along with Portuguese club legend Manuel Jose — beating Kaizer Chiefs 3-0 in the 2020/2021 final.

Mosimane also won the 2019/2020 Egyptian Cup from the quarterfinal stage, closed out the 2019/2020 Premier League unbeaten that had been wrapped up under predecessor Rene Weiler, and the 2021 Caf Super Cup.

Ahly’s failure to win the 2020/2021 Premier League, ceding it to Zamalek, and a penalties Egyptian Super Cup defeat to El-Gaish, have put a margin of pressure on the coach at a club expected to win almost everything.

“For me I can only put praise on El Khatib for what he's done and how he runs his club, and how he runs everything else. He's really, really an exceptional president leading Al Ahly,” Johnson said.

“And yes, the way they do it, it's completely different.”

Johnson — who also coached AmaZulu, and had a difficult stint at Black Leopards where he suffered a heart attack in January 2020 — said he will wait patiently for the right offer before taking a job in SA.

“Yes, that's what I'm waiting for — the right opportunity to see where I can use my expertise that I have got over the last 30 years and not only at Al Ahly, and to try to get back to another level.”

SA football will not strengthen its culture if it does not give more opportunities to qualified coaches from within the country, and while clubs ...
Sport
8 months ago

Pitso Mosimane furiously lashed out at a member of the Egyptian media when questioned about bringing on Mozambican forward Luis Miquissone late in Al ...
Sport
8 months ago

Is Mosimane the right guy to take over United?
Sport
8 months ago

“This is just to thank them for their contribution towards me and football in SA. This is just to acknowledge the work done [because] without you I ...
Sport
8 months ago