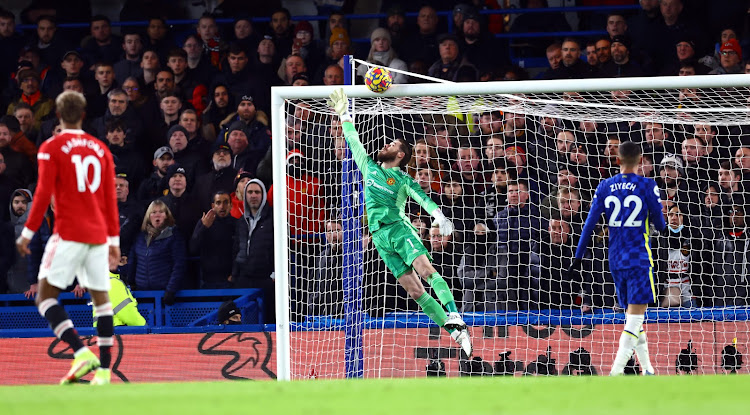 Chelsea coach and manager Thomas Tuchel says his side was the better team on the day.
Image: @premierleague/Twitter

Manchester United put their worries to one side to frustrate Premier League leaders Chelsea with a 1-1 draw at Stamford Bridge on Sunday as Jadon Sancho scored a breakaway goal that was cancelled out by a Jorginho penalty.

Chelsea, under pressure after Manchester City and Liverpool both won earlier over the weekend, were dominant against a United side playing their first Premier League match under caretaker manager Michael Carrick after Ole Gunnar Solskjaer's sacking last weekend.

But the Blues were punished for failing to turn possession into goals five minutes after the restart when United cleared a Chelsea free kick and Jorginho - on his own near the halfway line - miscontrolled the high ball, allowing Sancho to race past him and beat the helpless Edouard Mendy.

Orlando Pirates continued to go about their business on the continent quietly when they beat LRPC Oilers of Liberia 2-0 in an away encounter at ...
Sport
5 months ago

Chelsea were rocked by the goal against the run of play but Jorginho repaid his debt to the Stamford Bridge faithful in the 69th minute when he coolly converted a penalty after Aaron Wan-Bissaka had fouled Thiago Silva.

The hosts brought on Romelu Lukaku, returning from injury as a substitute for the last 10 minutes, but they failed to find a way through United's defence.

Fred had United's best late chance to snatch a winner after a Mendy error but he wasted his shot. Then Antonio Rudiger, who had hit the crossbar in the first half, missed with a volley in almost the last kick of the game.

"We were the better team, we were the team who invested in this game to win," Chelsea coach Thomas Tuchel told BBC radio.

An invigorated Kaizer Chiefs crushed struggling Swallows 3-1 in the Soweto derby in Dobsonville on Sunday to shoot to second place on the DStv ...
Sport
5 months ago

"We tried to win it from the first to the last minute. We had full control in all moments except one. We dealt with it. We came back... There is nothing to worry (about)."

United goalkeeper David de Gea, who pulled off a string of saves to keep his side in the game, sounded like a relieved man after Chelsea racked up 24 shots to United's three.

"On the pitch, in the goal, I was feeling danger for nearly the whole game," De Gea told Sky Sports. "We defended well, they missed big chances and the one they give us... we score. It is not enough to draw but at the moment it is a big point."

It has been several days since the Fifa disciplinary committee met in Zurich, Switzerland, to decide Bafana Bafana's 2022 World Cup qualifying fate ...
Sport
5 months ago

The result leaves Chelsea top of the table, a point ahead of Manchester City and two clear of Liverpool. United sit in eighth place, 12 points behind Chelsea.

Carrick dropped Cristiano Ronaldo to the bench as he sought to frustrate Chelsea with a defence-focused approach but he brought on the Portuguese star in the second half.

The former United midfielder looks likely to step aside soon after the club announced German coach Ralf Rangnick will take over as interim manager until the end of the season.

The league will discuss the directive at its next committee meeting  in December.
Sport
5 months ago