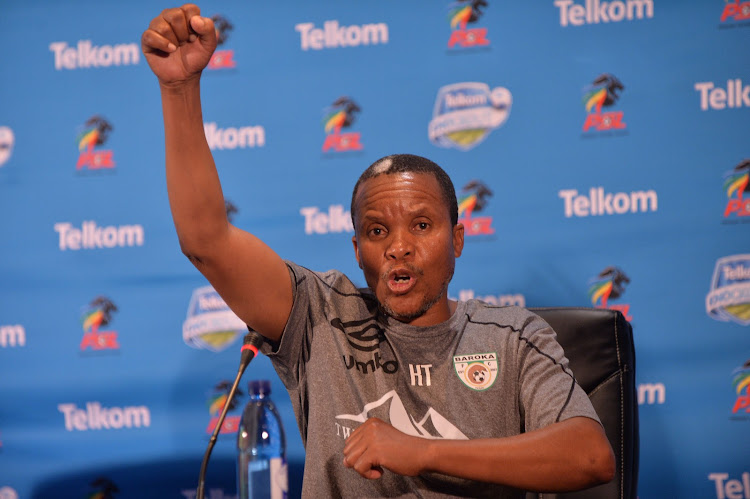 Having failed to get three points in his first match in charge against Golden Arrows a few days ago, Baroka coach Kgoloko Thobejane has now turned his attention to Orlando Pirates.

Baroka lost 3-2 to Arrows last weekend and they take on Pirates in their next DStv Premiership encounter at Orlando Stadium on Thursday where they are looking for their first win in seven matches.

During this unproductive seven-match run, Baroka lost five matches to AmaZulu, SuperSport United, TS Galaxy, Chippa United and Arrows and drew with Royal AM and Stellenbosch.

Pirates, on the other hand, are on the up with two wins, two draws and one loss from their five last league matches, a run that has pushed them to seventh spot on the log.

“Our plan has not changed much, we lost the three points against Arrows but there are twelve more to play for in the next four matches of this first cycle,” said the outspoken Thobejane, who still has to contend with struggling Swallows, Cape Town City, Mamelodi Sundowns and Stellenbosch before the end of the year.

“Our position on the log standings is not good at the moment and we need those points on offer. Our next match is against Pirates and if you want to be the best, you must beat the best.

“That’s how the game goes. It will be eleven against eleven on the pitch. Some of these teams are just big names but they don’t scare us because we are here to compete against anyone.

“We just need to prepare ourselves very well. The most important thing is to make sure that we don’t concede against Pirates but at the same time we have to score goals. If we do that in the coming matches, we will be fine.”

Looking back at their loss to Arrows, Thobejane said players fought hard but they were undone by the late penalty.

“It was out first game, the boys tried their best and we fought very hard from 2-0 down to 2-2 after 80 minutes. We scored our second goal to equalise for 2-2 with a man down but they got a penalty in the 84th minute.

“When we equalised after 80 minutes we had hope that we will get something out of the match but we were killed by that late penalty. That penalty is a huge blow for us but it also presents an opportunity for other players to show us what they can do.”

Swallows were the better side despite losing the Soweto derby 3-1 at home against Kaizer Chiefs, coach Brandon Truter insisted after the match on ...
Sport
1 month ago

Denis Onyango took one for the team with the red card he had to concede in the dying moments of Mamelodi Sundowns' 2-0 win against Sekhukhune United ...
Sport
1 month ago