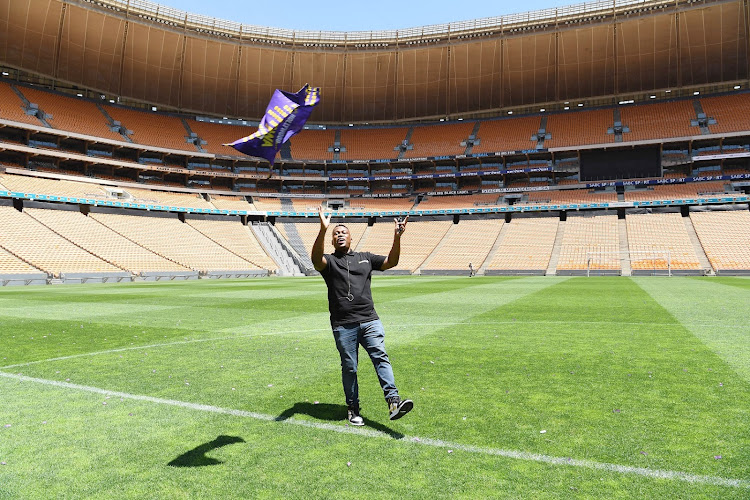 Robert Marawa during the announcement that he will be the Hollywoodbets brand ambassador at FNB Stadium in Johannesburg on December 1 2021.
Image: Lefty Shivambu/Gallo Images

There was plenty of Hollywood flavour to the occasion, as Marawa was brought out from the stadium tunnel accompanied by a marching band, cheerleaders, flames, fireworks and glitter cannons.

Marawa, whose contract was not renewed by the SABC in July, has signed with Arena Holdings to air his award-winning Marawa Sports Worldwide show, streamed live on SowetanLIVE.co.za, and the company’s radio stations, Vuma FM in KwaZulu-Natal and Rise FM in Mpumalanga.

Flames, a marching band and cheerleaders: @Hollywoodbets go all out launching @robertmarawa as a brand ambassador at @FnbStadium pic.twitter.com/RoDbs1gwjO

Mboweni wants Marawa on Radio 2000, but we think he should tune in on Arena’s platforms instead

'Who 'dealt' with me?'- Robert Marawa claps back at Mbalula over SABC 'jab'

Poet Mzwakhe Mbuli says his planned march to the SABC to demand the reinstatement of Robert Marawa as a talk show host will go ahead despite Arena ...
Sport
2 months ago

Revered sports broadcaster Robert Marawa is back on air doing what he loves most.
Sport
2 months ago