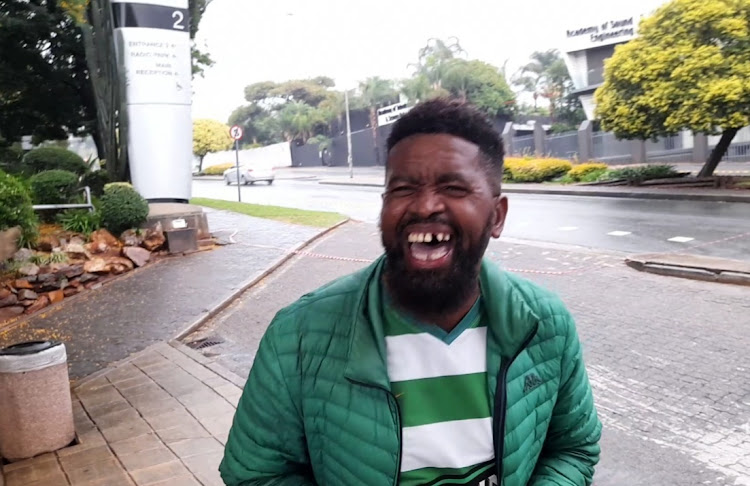 Bloemfontein Celtic superfan Botha Msila attends a march to demand the reinstatement of Robert Marawa on SABC radio at the public broadcaster's headquarters in Johannesburg on November 27 2021.
Image: Marc Strydom

Famous Bloemfontein Celtic supporter Botha Msila says he and his famous shower cap are “not available to join any club” on transfer.

The team Msila supports was sold from under his and the club's famously fanatical Bloemfontein support base's feet in the off-season to be moved to Durban and become Royal AM.

Despite this, Msila said he is “not a free agent” and should not be expected to follow the example of Joy “Mama Joy” Chauke, who switched allegiances from Orlando Pirates to Royal AM last week. Msila said he will wait for Celtic to be resurrected rather than abandon the green and white hoops of the now-defunct Free State team.

“I'm still going to support SA football like I did when I had Bloemfontein Celtic. I'm going to go to all the stadiums to support football,” Msila said.

“But to all the other SA football clubs, please, I'm not a free agent. I'm not available to join any club.

. @Bloem_Celtic superfan Botha Msila says he is 'not a free agent' even though he doesn't have a team any more pic.twitter.com/TJL1ygb8ze

“When I get someone, or when we get another team, we will be proper supporters who understand how to support a team in a proper way.”

Chauke's switch to the team who bought Celtic, Royal, sparked speculation on social media that Msila might be up for grabs as a No 1 fan for some of the bigger clubs.

“I'm not interested in joining any club. I'm still a Celtic fan,” he said.

“It's going to be unfair to myself not to be among the fans who are crying.

“We are fighting to get a team to come to Bloemfontein, and to get someone who is willing to buy the status to have a team in the GladAfrica [Championship, or First Division].

“ Even if Manchester United approach me I'll tell them, 'Please, I'm not available'.”

Msila and the famous shower cap he dons at matches were seen at PSL matches around the country before Covid-19 suspended crowds in stadiums.

Bloemfontein Celtic’s famous, shower cap-sporting No 1 fan Botha Msila said that the sale of the club left him like a fish out of water, adding, “it ...
Sport
5 months ago

South African superfan Botha Msila attends so many soccer matches around the country that many often wonder how he finances his trips to numerous ...
Sport
1 year ago

Joy “Mama Joy” Chauke is all her characteristic belly laugh and high spirits as she grins and bears the backlash she has had from Orlando Pirates ...
Sport
1 month ago