Robert Marawa on calls for him to return to SABC: 'It's not a closed book' 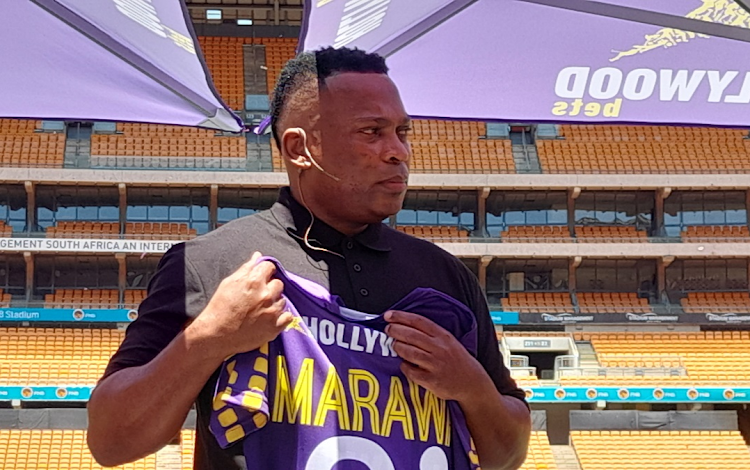 Robert Marawa is named as a brand ambassador for betting company Hollywoodbets at a function at FNB Stadium on December 1 2021.
Image: Marc Strydom

Robert Marawa believes he can help the smaller platform he now speaks from to grow, but also says of a return to the giant stage of the SABC's radio stations that it is “never a closed book”.

Marawa, whose contract for his award-winning Marawa Sports Worldwide (MSW) on Metro FM and Radio 2000 was not renewed by the SABC in July, signed with Arena Holdings last month. MSW is being aired daily on Arena's two radio stations, Vuma FM in KwaZulu-Natal and Rise FM in Mpumalanga, and streamed on SowetanLIVE.co.za.

This did not stop a march proceeding that was organised by “People's Poet” Mzwakhe Mbuli demanding the return of Marawa to the SABC, though only a handful of SA football's superfans braved the rain at the public broadcaster's Auckland Park headquarters on Saturday.

Tito Mboweni and Zwelinzima Vavi have called for Marawa's return to the SABC. The concern raised is that Marawa's critical voice — where he has raised awareness of racism in cricket and rugby, maladministration in all sports, and underperformance in football — needs the bigger platform.

“I was taken aback by Tito's comments because for him to put that out publicly said a lot to me about that space,” Marawa said. “There was also Zwelinzima Vavi quoted in a publication. Whether we are at war or peace with Fikile Mbalula, I've always known he's been one to support.

Radio 2000 is one of the good SABC radio stations. Great line up. Always listening on my home drive to Makgobaskloof. But poor on commercial advertising income. What happened to the great Robert Marawa sports show? I missed something. Let him return! I demand.,Petition time!!

“When I got fired ... ,” Marawa is interrupted, and it's pointed out the SABC has clarified his contract was not renewed.

He continued: “Well, I didn't finish my last show so technically I was prevented from concluding my contract. So when that happened I never knew so many politicians had my number, just phoning and asking, 'What the hell is going on, can we support?'

“I always say where I'm not wanted I'm not going to go back. But I'm humbled that people went out in the rain this past weekend to march to the SABC to get their voice heard.

“I've never had people march for me for anything. I'm not a cult figure, I'm just a person who loves sport and loves the broadcast of sport.

“When I see that, I don't even know how to react. I remain humbled by all those efforts. I don't take them for granted, but I'm happy there's a new space within the Arena group that has opened and provided a microphone for us to work and address the public issues.”

People's Poet Mzwakhe Mbuli speaks at the march he organised, attended by a few of SA football's superfans, to the SABC organised to demand the reinstatement of Robert Marawa on the public broadcaster's radio stations

Marawa said if MSW could help grow listenership at the SABC, it could do the same for Arena.

“I was on radio at the end of July, [and released from SABC] on the day that I won an award [Best Sports Show: Commercial at the SA Radio Awards on July 30] for three years running,” he said.

“So we can't be doing too badly. We left 2-million listeners [at Radio 2000], which they are now celebrating. MSW contributed largely to that.

“And the same will happen now. People didn't know Rise, Vuma, SowetanLIVE, and they now know. We get calls from the Eastern Cape, from Durban.

“I love starting new things. There was never a SoccerZone when I joined SABC [TV]. It became the most-watched show outside Generations.

“So now, if people keep shutting those taps from the outside, then you go to independent platforms.”

Flames, a marching band and cheerleaders: @Hollywoodbets go all out launching @robertmarawa as a brand ambassador at @FnbStadium pic.twitter.com/RoDbs1gwjO

To those saying he needs to be on the SABC, Marawa answers that it's not a closed book, but said the perceived management, and “external influence”, problems he has openly claimed — and the SABC has denied — since leaving would need to be resolved.

“I don't close my book to anything. I just think my work is open to those who want to receive it, as much as people have now learnt the art of downloading an app, or going to SowetanLIVE to stream it.

“Maybe in time SABC will get the management it deserves, the chair of the board it deserves, or CEO it deserves, because it has a major role to play in this country. People want to get into their cars and listen to radio without downloading anything — that is the bottom line.

“But it's not for me to do that — I can only walk into SABC as someone who's employed. But I can get into a partnership with Arena because there's mutual benefit in us growing the stations they have.

“Because they own those now. But they need to be more dominant in the areas they are in. And I'm not allergic to growing either non-existent or low-performing platforms.”

Marawa was speaking after being named brand ambassador for Hollywoodbets at FNB Stadium on Wednesday. MSW airs daily on SowetanLIVE.co.za, Rise and Vuma from 5.30pm to 7pm.

Mboweni wants Marawa on Radio 2000, but we think he should tune in on Arena’s platforms instead

'Who 'dealt' with me?'- Robert Marawa claps back at Mbalula over SABC 'jab'

Revered sports broadcaster Robert Marawa is back on air doing what he loves most.
Sport
2 months ago

Poet Mzwakhe Mbuli says his planned march to the SABC to demand the reinstatement of Robert Marawa as a talk show host will go ahead despite Arena ...
Sport
2 months ago