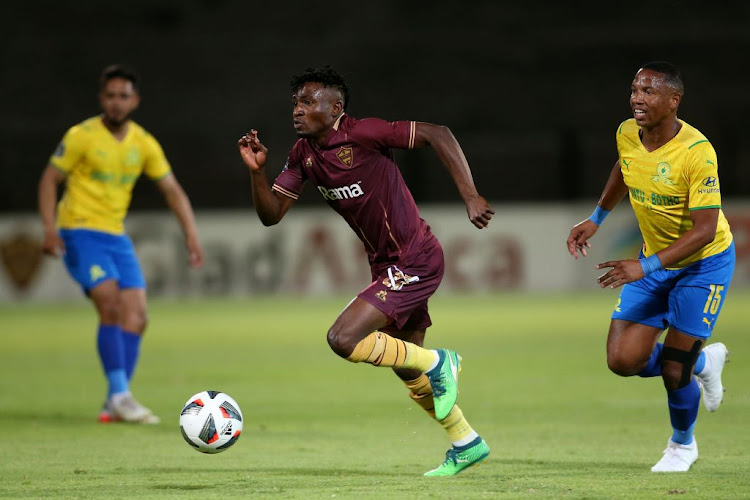 Mamelodi Sundowns were left to rue missed chances after their 1-1 draw with Stellenbosch while playing in unfavourable wet and windy conditions at the weekend.

The Brazilians enjoy a nine-point lead at the summit of the premiership table ahead of second-placed and surprise package Sekhukhune United.

The point earned by Stellenbosch saw the Western Cape side remain in fourth place, but coach Steve Barker will be worried they have failed to register three points in their last five outings, where they managed three draws and two losses.

Looking back at the match, Manqoba Mngqithi said they should have capitalised on some of the good chances they created.

“We have always known it was not going to be an easy match because Stellenbosch always gives us a tough time,” he said.

“We got very good chances in the first half which I think we could have capitalised on. Thabiso Kutumela was very clear their goalkeeper Sage Stephens made a very good save to deny Grant Kekana’s header and Peter Shalulile also could have done something.

“Unfortunately when you don’t take those chances they get a break, which I think we could have dealt with before it even arrived at the box. I have to see properly what happened inside the box with their penalty, but I do believe it is possible it was a penalty even though I have not seen video footage at this stage.”

Mngqithi pointed out that the strong winds and wet conditions made things very difficult for his side.

"The wind was too much and made the game not flow the way we would have wanted. I thought when we got the equaliser, we will gain control of the game but we were a little bit anxious and ended up spoiling very good moments.

“The wind favoured us in the second half but at times we over-hit the ball and all that. Overall I think we did well under the circumstances. It’s not nice to drop points.

"We expected them to play with a Augustine Dingba and Ashley du Preez upfront to try and look for space behind our defence. We did expect Junior Mandieta to play as a 10 or maybe come from the wide channels and that is exactly what happened.”