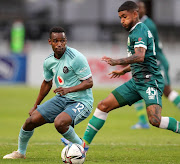 Orlando Pirates and AmaZulu had notched 16 draws in 27 DStv Premiership outings between them already before meeting on Wednesday evening so it was no surprise they battled out to another 1-1 stalemate at Kings Park.

Deon Hotto struck Pirates ahead in the 29th minute. Winger Tshepang Moremi, the 21-year-old signed from Bizana Pondo Chiefs in then off-season struck Usuthu's equaliser in the 45th.

A notable feature of the game was Thembinkosi Lorch's long-awaited return and first run of the season, and first outing in a competitive match since Bucs' 0-0 league draw against TTM on June 5. Pirates' talismanic creative star replaced Collins Makgaga in the 79th minute and put in a strong final 14 minutes, with added time.

Bucs had to work hard to grind out a lead in the opening half, then conceded softly just before the break.

They took the lead through a snappily-worked goal just past the half-hour.

Makaringe's pass forward out of the centre circle found Kwame Peprah with his back to goal, whose first touch was a pass out to Makgaga on the right. The midfielder's chip found Hotto's run free on the left, who buried a finish past Veli Mothwa.

AmaZulu's equaliser came moments before the break. Keagan Buchanan stroked out to fullback Kgotso Moleko, up on the right, whose cross found Luvuyo Memela at the far post to head back across the face. Moremi had been left free at the right upright to strike past Siyabonga Mpontshane.

Back from the break Pirates came out playing high and looking to wrest back an advantage they had allowed to slip somewhat softly in the opening half.

Makaringe shaped a strike past the upright and Peprah forced a save with a powerful strike at Mothwa.

Usuthu's clever Kiwi attacking midfielder Andre de Jong arrived with a late run on the edge of the box to Moremi's pass from the left and angled a low strike that Paseko Mako scrambled clear from in front of the line.

Deep in injury time Lorch, having provided some assists for chances in a lively return to first team action, struck into the legs of Mothwa. Moments later he got onto the end of Peprah's cross but skied his volley from three metres.