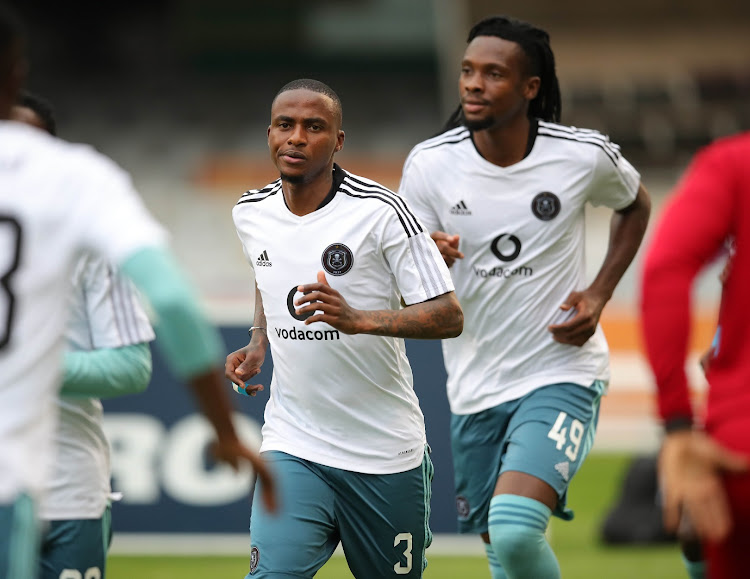 Thembinkosi Lorch of Orlando Pirates warming up ahead of the DStv Premiership match against AmaZulu at Kings Park in Durban on December 8 2021.
Image: Samuel Shivambu/BackpagePix/Gallo Images

Orlando Pirates co-coach Mandla Ncikazi believes a fit-again Thembinkosi Lorch can provide the missing piece of the puzzle as Orlando Pirates continue to battle to convert draws into victories.

Lorch made a 79th-minute substitutes' return from injury and put in a bright shift at the end of Bucs' 1-1 draw against AmaZulu at Kings Park on Wednesday evening, also Bucs' talismanic creative attacker's first appearance of the season.

Lorch returned from an abductor muscle tear for his first outing in a competitive match since Bucs' 0-0 league draw against Tshakhuma Tsha Madzivhandila on June 5.

Pirates' coaches Ncikazi and Fadlu Davids will hope to give the attacker a longer run when they meet TS Galaxy at Orlando Stadium on Saturday evening.

“Highly excited. You just see the quality,” Ncikazi said of Lorch's 14-minute — with added time — return to the field.

“The first assist to Deon Hotto on top, and maybe the final miss at the end, but the important thing was him getting there.

“Lorch is quality and I'm confident that if he plays like this for his first game after such a long time injured, it's all positive.

“I hope he grows from here and assists the team with what is missing the most, which is goals. We're playing good football, but maybe you need a Lorch to finish the product.”

Ncikazi said again Bucs dominated a game against AmaZulu, and again one piece was missing — scoring.

“We should have won the match based on the dominance. Maybe if there's one area I would have to blame it was that I thought after scoring in the first half we were not the same team that started the match,” the coach said.

“But in the second half it was total dominance. And when your team cannot score with such dominance, such good play, we are just the team that plays good football without the points.

“In the previous matches we had not been scoring. Today we conceded a very easy goal that could have been stopped.

“But if you don't score goals you're not going to win matches. There are teams not even playing half of what we're doing but they're getting the points.”

Orlando Pirates and AmaZulu had notched 16 draws in 27 DStv Premiership outings between them already before meeting on Wednesday evening so it was no ...
Sport
6 months ago

TS Galaxy eased their relegation pressure when they beat Chippa United 3-1 in a DStv Premiership match played at the Mbombela Stadium in Mbombela on ...
Sport
6 months ago

Orlando Pirates co-coach Mandla Ncikazi has said his technical staff need to encourage a Bucs desperate for points to be calm in front of goal.
Sport
6 months ago

Missed chances and a gritty, fighting performance from Baroka FC saw Orlando Pirates having to settle for a 0-0 DStv Premiership draw at Orlando ...
Sport
6 months ago