Orlando Pirates find some sparkle snuffing out the lights of Galaxy 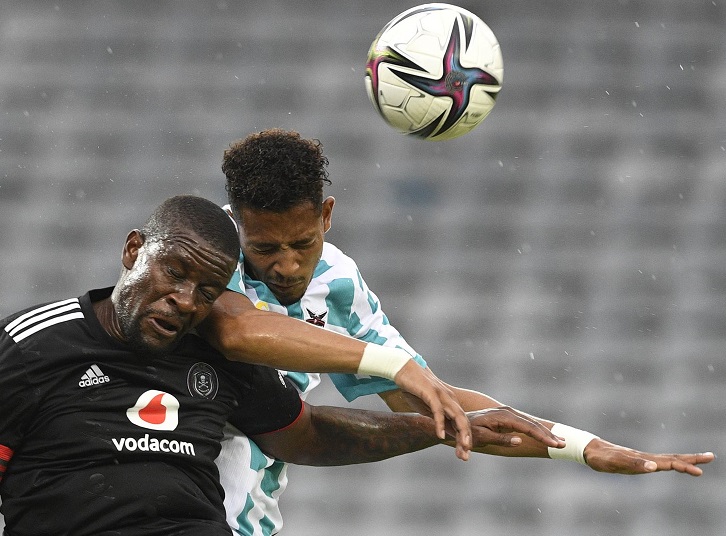 Orlando Pirates' Ntsikelelo Nyauza and TS Galaxy's Wayde Lekay get up for an aerial challenge in the DStv Premiership match at Orlando Stadium on December 11 2021.
Image: Orlando Pirates FC/Twitter

Orlando Pirates might have been frustrated at their high rate of draws in the opening half of the season, but slowly the gameplan of their coaching duo has shown signs of coming together, including in Saturday's 2-0 DStv Premiership win against TS Galaxy.

Bucs went to their halfway 15th game with a performance of such precision, and more than a hint of style, that it would certainly have buoyed the squad and coaches Mandla Ncikazi and Fadlu Davids that the Buccaneer ship is finally finding the correct course after a battling start to the campaign.

Strikes from Bandile Shandu in the 14th minute and Collins Makgaka in the 51st continued to add to the sprightly right-back and promising midfielder's growing reputations in black and white jerseys.

Consistency in line-ups and trusting the process are paying off for Bucs, who have lost just twice in the opening half of the season, and are showing signs of working out the formula of turning draws into victories.

The manner in which Pirates moved the ball with quick, one-touch inter-passing movements that left baffled Galaxy defenders in their wake held much promise that Ncikazi and Davids’ game model is taking hold.

The Soweto giants took the lead through a goal from nothing. Paseka Mako’s cross in a static situation picked out the run alone, free of marker Ethan Brooks, on the right of Shandu to force a stop from Marlon Heugh with a close volley. The rebound squirted to the right where the alert Shandu threaded a finish through a needle from a tight angle.

Just before the half-hour Kwame Peprah almost got his much-awaited first goal from a sublime movement. Deon Hotto brought the ball down and fed Peprah on the right edge of the box, who played back inside to Hotto and took a return pass piercing through, side-footing an attempted finish onto the right upright and across the goal line.

Ghanaian Peprah’s class touches have been the reason he has started a string of matches even though he has not scored. Back from the break, Hotto’s attempted chip was intercepted and fell to Peprah on the right, whose clever touchback in across the face found Hotto in the centre again — the same combination who had pried Galaxy open for the first goal. Hotto laid off to Makgaka next to him, who had an easy finish.

Having taken a 2-0 lead Bucs looked to consolidate the cushion. Mostly the back four, and impressive growing central partnership of Olisa Ndah and Ntsikelelo Nyauza, snuffed out danger when Galaxy forayed into Bucs' area.

This forced the Rockets into shots from range. Masilake Phohlongo, on for Brooks in the 62nd, managed a well-struck one of those with a dipping drive that had Siyabonga Mpontshane at full stretch.

But Bucs' game management was as on point as their earlier crisp build-ups had been, and they closed out one of their most efficient performances and results of the campaign so far.

Orlando Pirates and AmaZulu had notched 16 draws in 27 DStv Premiership outings between them already before meeting on Wednesday evening so it was no ...
Sport
6 months ago

Benni McCarthy: 'I hope Chiefs don't get punished for something happening in the world'

AmaZulu coach Benni McCarthy has said that he hopes Kaizer Chiefs do not get punished for a situation beyond their control where the Soweto giants ...
Sport
6 months ago

Ex-Bafana Bafana star Teko Modise has spoken about a period of his youth when he was eight when he was a "street kid" and lived "in the veld".
Sport
6 months ago