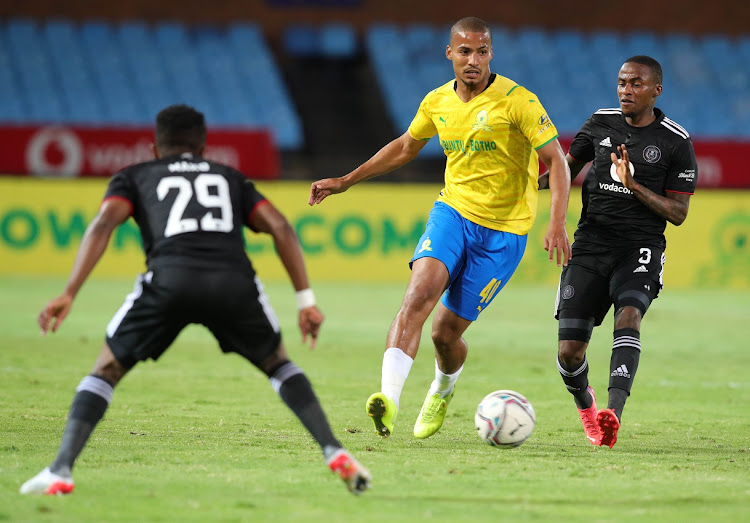 Rivaldo Coetzee of Mamelodi Sundowns is challenged by Thembinkosi Lorch of Orlando Pirates in the DStv Premiership match at Loftus Versfeld in Pretoria on December 17 2021.
Image: Samuel Shivambu/BackpagePix/Gallo Images

The Brazilians flexed their muscles in the second period after the teams had been goalless at the break. Zwane opened the scoring in the 51st. Substitute Pavol Safranko (61st and 73rd minutes), who came on at half time for the injured Grant Kekana, scored a brace and Peter Shalulile (76th) got his 13th goal of the campaign.

Fortune Makaringe scored a consolation goal for Pirates in the 90th with virtually the last kick of the game, but it was far too little too late for the visitors.

The win moves Sundowns 18 points clear of the chasing pack and leaves them with one hand firmly on the trophy just past the halfway mark of the season, underlining their status as one of the best squads the Premiership has ever seen.

The result could have repercussions for the Pirates co-coaching duo of Mandla Ncikazi and Fadlu Davids heading into the long break for the festive season and Africa Cup of Nations, given how thoroughly their side was outplayed in every department.

Zwane brought up his milestone early in the second half, providing an easy finish from close range after Shalulile headed Lyle Lakay’s free-kick back across the Pirates goal.

Slovakian forward Safranko added a second with a header from Lakay’s corner 10 minutes later, effectively killing the contest with Pirates offering little in attack all game.

His brace came as referee Victor Gomes played good advantage when Pirates goalkeeper Siyabonga Mpontshane appeared to upend Shalulile in attempting to save at the feet of the forward and Safranko converted the loose ball.

Pirates, who had lost Nigerian centreback Olisa Ndah to injury at half time, were floundering, especially with high balls into the box and Shalulile headed the fourth from another excellent Lakay delivery.

Moments earlier Shalulile had been denied a goal when one-on-one with Mpontshane as the Pirates defence went Awol and had to be saved with a good stop by their keeper.

Makaringe got his first league goal of the season with a fine strike from the edge of the box, and perhaps there will be a little annoyance on the Sundowns side that they were not able to keep the clean sheet, but it should not take the gloss off an excellent win.

It is the fifth time Sundowns have beaten Pirates in the 2021 calendar year, continuing their dominance over the Buccaneers and extending their unbeaten record in the league against all sides to 25 games, closing in fast on Kaizer Chiefs' record of 31 matches set in 2005.

One of those recent victories for Sundowns over Pirates was also a 4-1 success in last season’s Nedbank Cup, while the Brazilians have netted 14 goals in that run and conceded only once. It is a measure of how far Pirates are behind the Tshwane side.

Sundowns last went pointless in the league in a 2-1 home defeat to Chiefs in April, a game that still rankles with co-coach Manqoba Mngqithi after they let a lead slip in the second half in a game he feels they should never have lost.

For Pirates it is a third defeat of the season and while they remain in third place for now, they could be sent tumbling down the table if other results go against them this weekend.

Both sides have two games remaining before the festive season break on Monday and Thursday, with each to meet AmaZulu and Marumo Gallants in those matches.

Orlando Pirates would have hoped a knock to the head for Mamelodi Sundowns’ Peter Shalulile this week ruled him out of the DStv Premiership clash ...
Sport
6 months ago

Orlando Pirates coach Mandla Ncikazi says his team are being subjected to "bad decisions week in, week out" from match officials.
Sport
6 months ago

Swallows travel to Cape hoping to build on performance against Pirates

DStv Premiership battlers Swallows FC will aim to build on a promising performance in midweek against Orlando Pirates when they meet Cape Town City ...
Sport
6 months ago