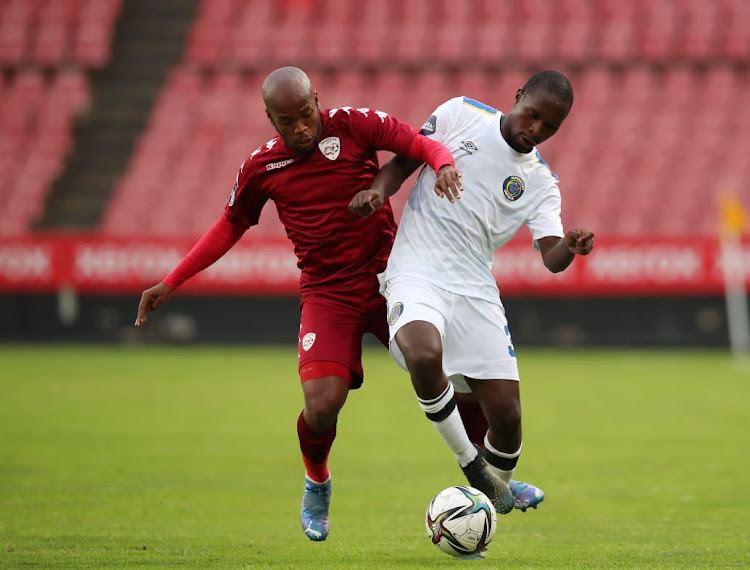 SuperSport have more than understandably struggled for results amid a torrid outbreak of Covid-19 cases at the Pretoria club.

Coach Kaitano Tembo, Bafana Bafana captain Ronwen Williams and last season’s leading goal scorer Bradley Grobler were again among absentees for Matsatsantsa. They had just five players on their bench including two — Sthembiso Kurata and Sibusiso Maziko — drafted from their reserve side.

SuperSport test their players and staff twice a week under instruction from parent company MultiChoice and have had many more positive outcomes than any other club in the league, save for the 36 at Kaizer Chiefs over the past few weeks.

After Saturday's stalemate, they have won twice in nine matches, losing five times and drawing twice.

Ndah injury unsettled Pirates in hammering by Sundowns, but 'that's no excuse'

Orlando Pirates co-coach Fadlu Davids said the injury to centreback Olisa Ndah coming back for the second half with the scores at 0-0 was disruptive ...
Sport
7 months ago

The Pretoria side, though, would have felt that, under the circumstances, a point against MacDonald Makhubedu's tough and tight promoted Sekhukhune away was a decent outcome.

Sekhukhune, riding high in second place weeks ago, have been less consistent latterly, slipping to sixth coming into Saturday's game. They have now won three, lost four and drawn one of their last eight league games.

SuperSport had the best chance of the half inside the opening 10 minutes. Sekhukhune stopped playing when they seemed to expect a foul on centreback Justice Chabalala allowing Thamsanqa Gabuza to find Ghampani Lungu free on the left, whose low strike hit the right upright.

From there Sekhukhune worked hard to edge the half-chances, including when Charlton Mashumba headed on target and Seth Parusnath curled a free-kick onto the top netting

Sekhukhune continued to pressurise from the break. Substitute Tshediso Patjie's cross found Prince Nxumalo to first head onto the back of Kegan Johannes, then from the rebound the striker shot onto the young SuperSport centreback.

The game ended in a flurry of chances, neither side able to land a decisive blow.

SuperSport United are fearful more Covid-19 infections will decimate their squad and leave them more threadbare for their next outing after they had ...
Sport
8 months ago

Mamelodi Sundowns have been built into their awe-inspiring current incarnation through continuity for the better part of a decade, said Orlando ...
Sport
7 months ago

Sundowns coach Mokwena: Zwane ‘has qualities that belong to the best in the world’

Themba Zwane is not just world-class in ability, but also the manner in which he complements his talent, like the best players in the world do, says ...
Sport
7 months ago