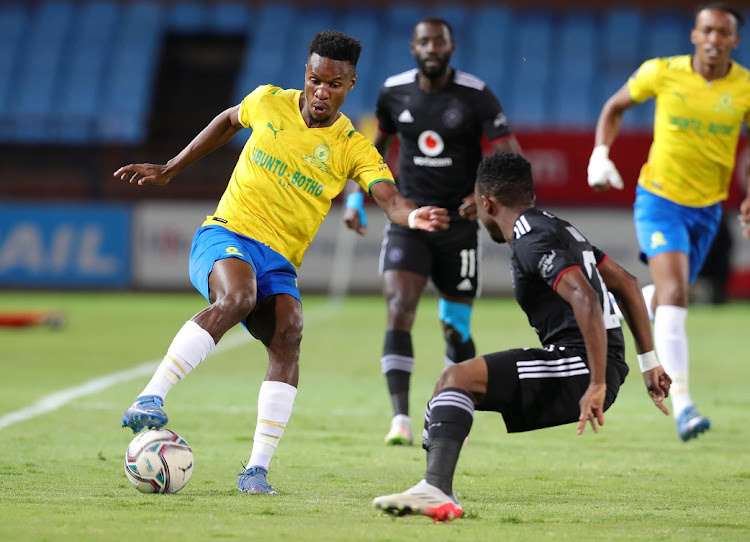 Themba Zwane of Mamelodi Sundowns is challenged by Paseka Mako of Orlando Pirates in the DStv Premiership match at Loftus Versfeld in Pretoria on December 17 2021.
Image: Samuel Shivambu/BackpagePix/Gallo Images

Mamelodi Sundowns have been built into their awe-inspiring current incarnation through continuity for the better part of a decade, said Orlando Pirates co-coach Fadlu Davids when asked to explain the Brazilians' recent dominance over the Buccaneers.

Pirates suffered another embarrassment at the hands of trophy machine Sundowns, who opened an 18-point lead in the DStv Premiership in their quest to seal five straight titles with a 4-1 hammering of Bucs at Loftus Versfeld on Friday night.

Pirates have never recovered since their infamous 6-0 thrashing amid a violent pitch invasion by Sundowns in November 2016. After Friday night, Bucs have won just two of 12 meetings since, losing eight and drawing two.

Downs' dominance has only gathered force, winning the last five clashes, scoring 14 goals in them and conceding a miserly two.

Davids was asked if Friday's bruising rammed home how far Pirates have to go to catch up to Sundowns.

“And we can't look too far at other teams; we have to look internally. We have to look at how we are developing as a team, and how we're progressing and putting in place not only short-term plans but of course long-term plans to fulfil our potential as a squad.

“It's not to look at Sundowns and compare. We have to look at our squad internally, what we have, which players are coming back in January, and improve the team.

“Every game is possible to win, and that's what we've got to focus on. Keep improving the team, the squad, make us stronger as a unit to be able to improve and take us closer to where we want to be.”

After an evenly-matched opening half, Downs stormed to a 4-0 lead in the second (Themba Zwane 51st minute, Pavol Šafranko 61st and 72nd, Peter Shalulile 76th) before Fortune Makaringe pulled one back for Bucs in the 92nd.

Mamelodi Sundowns coach Rulani Mokwena says there is no chance his team will be complacent against Orlando Pirates.
Sport
7 months ago

Orlando Pirates would have hoped a knock to the head for Mamelodi Sundowns’ Peter Shalulile this week ruled him out of the DStv Premiership clash ...
Sport
7 months ago

Premiership clubs are concerned about injuries to their players in the DStv Compact Cup, and disgruntled and shocked that the Premier Soccer League ...
Sport
7 months ago