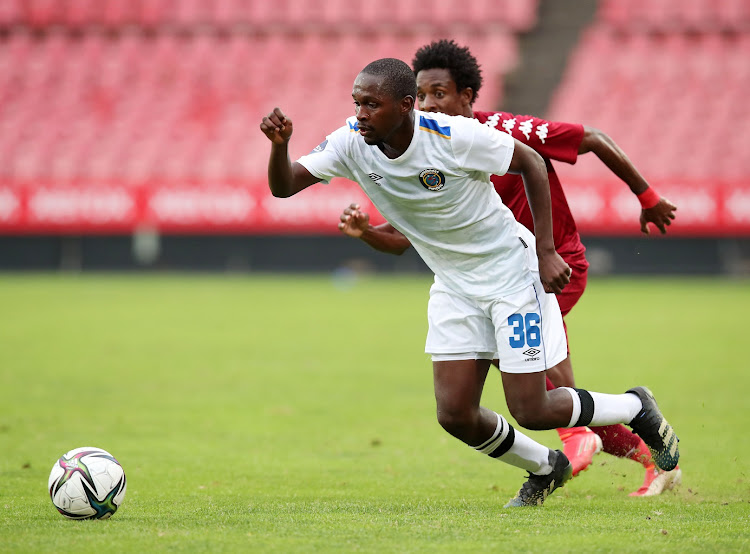 Tendamudzimu Matodzi of SuperSport United is challenged by Talent Chawapiwa of Sekhukhune United in the DStv Premiership match at Ellis Park in Johannesburg on December 18 2021.
Image: Muzi Ntombela/BackpagePix/Gallo Images

Young SuperSport United players who have been drafted into the senior squad have excelled after being thrown in the deep end, Andre Arendse said after a hugely depleted Matsatsantsa toughed out a 1-1 draw against Sekhukhune United on Saturday.

The Pretoria team's final game before the Christmas and Africa Cup of Nations break is against Cape Town City at Lucas Moripe Stadium on Wednesday and given the state of the squad, they will be grateful to have limped to a welcome respite.

SuperSport's squad has been decimated by an outbreak of Covid-19 and they had just five players on their bench at Ellis Park, including two — Sthembiso Kurata and Sibusiso Maziko — drafted from their reserve side.

Matsatsantsa again missed key figures such as Bafana Bafana captain Ronwen Williams in goal, Buhle Mkhwanazi and Siyabonga Nhlapo at the back, Sipho Mbule and Kudakwashe Mahachi in midfield and Bradley Grobler at striker.

Tendamudzimu Matodzi made a good debut on the right wing. Selaelo Rasebotja, 20, made a second start in central midfield. Kegan Johannes, 20, added to his emerging reputation with another strong display at centreback in his sixth start.

“I said to the young players that what this pandemic is doing is presenting opportunities  and they must look at it as grabbing these chances,” said goalkeeper coach Arendse, standing in on the bench for coach Kaitano Tembo, who has also tested positive for Covid-19.

“And I can't fault them. We've put a few youngsters in now. Kegan Johannes has slotted in very well in that centre of defence. We forget that he's still a youngster.”

Sixth-placed Sekhukhune edged play, but eighth-positioned SuperSport held out and had chances to take all three points at the end.

“We said it would be a tough one and it was. But the guys showed character,” Arendse said.

“There were big hearts out there with the way they battled physically and I've got to give credit to our back four again for standing solid.

“Once again [goalkeeper Boalefa] Pule was instrumental. He came and helped the team with high balls. His positional play was very good.

“I was very happy with the debut from Tenda [Matodzi]. Obviously the legs went a bit as the game went on, but that's just fitness level.

“It was important for us to get Teboho [Mokoena] game time coming back and he always brings stability to the midfield.

“Selaelo and Jamie [Webber] worked very well in midfield. I thought they were really good in their combination work. We could have stolen it in the end.”

Sekhukhune coach Makhubedu: ‘We are a very strong side’

Sekhukhune United were on top of their game apart from some decision-making in the final third, coach MacDonald Makhubedu said after his team ...
Sport
4 months ago

Premiership clubs are concerned about injuries to their players in the DStv Compact Cup, and disgruntled and shocked that the Premier Soccer League ...
Sport
4 months ago

Reports linking Hunt with the Orlando Pirates job have intensified, particularly in the wake of the 4-1 thumping handed to the Buccaneers by ...
Sport
4 months ago