'We were not at our best in almost all the phases,' says Sundowns' Mngqithi 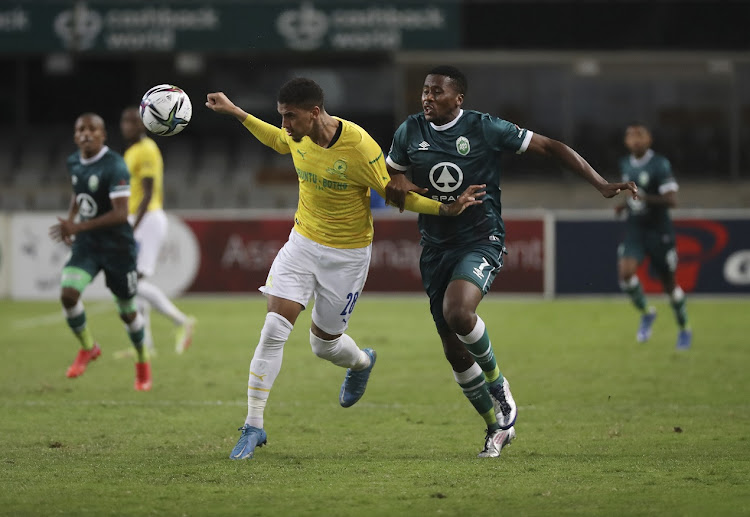 Rushine De Reuck of Mamelodi Sundowns wins a header against Bonginkosi Ntuli of AmaZulu in the DStv Premiership match at Kings Park in Durban on December 20 2021.
Image: Gavin Barker/BackpagePix/Gallo Images

Mamelodi Sundowns were “not at our best in almost all the phases”, coach Manqoba Mngqithi admitted after his team's first DStv Premiership defeat of 2021-22, 1-0 against AmaZulu at Kings Park on Monday night.

Mngqithi admitted a frenetic programme running into the Christmas break might have affected Downs' energy and application levels, but said he did not want to use that as an excuse for a first loss in 29 matches in all competitions for the Brazilians.

He said win-machine Downs first need to be proud of their relentless pursuit of results since their last defeat against Al Ahly in Cairo in the Caf Champions League in May.

“One is very proud of the team. I think the boys have fought very hard. We have made life very difficult for teams to punish us,” Mngqithi said.

“We were also caught [on Monday] with a bit of a lapse in concentration in our rest defence.

“We were not as incisive as you would want to see, we lost far too many balls in wrong areas and exposed ourselves in counterattacks against a team that had players like Thabo Qalinge and Luvuyo Memela, who was brilliant and always looking for opportunities behind our defence. Bongi [Ntuli] was a handful in the first half.

“One is a bit unhappy and edgy about the performance. We were not at our best in almost all the phases.

“We are hardly caught with so many counterattacks in a game, but tonight we were a bit exposed and you would ask yourself why we were more anxious to open ourselves for such counterattacks. And I don't think we took a lot of shots at goal on the day.”

A hectic programme saw Sundowns beat Baroka FC 2-1 on Tuesday, thrash Orlando Pirates 4-1 on Saturday (both at home), lose against AmaZulu on Monday and they still have to face Marumo Gallants at Loftus Versfeld in Pretoria on Thursday before the league breaks for almost two months.

Mngqithi admitted this might have played a role in a lethargic display against Usuthu.

“With so many matches in a short space of time you will always have issues with freshness, but it's not an excuse,” he said.

“That is always [something to consider in] hindsight. A game that springs to mind is Baroka. We may be looking at the Pirates game because it was a big match, but the game against Baroka, for me, is the one that took a lot from the team, given we played the whole second half a man short after the red card to Kermit Erasmus.

“We still had to play the Pirates game after that, where we had to make sure because it was a six-pointer. Then to AmaZulu, a team who have not been at their best, but have always shown signs they could hurt someone, and unfortunately we got caught.”

The move aims to resolve the confederation’s long-standing and crippling broadcast rights impasse.
Sport
5 months ago

Confederation of African Football president Patrice Motsepe has made an emergency dash to Cameroon as the country’s hosting of next month’s Africa ...
Sport
5 months ago

Former Kaizer Chiefs and Orlando Pirates coach Muhsin Ertugral says Mamelodi Sundowns are the biggest club in the country at the moment as their ...
Sport
5 months ago

Reports linking Hunt with the Orlando Pirates job have intensified, particularly in the wake of the 4-1 thumping handed to the Buccaneers by ...
Sport
5 months ago