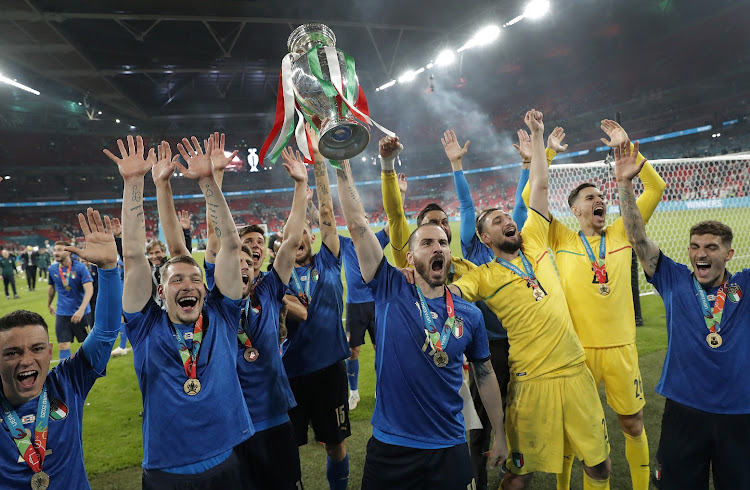 Leonardo Bonucci lifts the trophy as the Italians celebrate victory after Euro 2020 final against England at Wembley Stadium in London on July 11 2021.
Image: Tom Jenkins/Getty Images

As football fans came back to stadiums in 2021, reclaiming the grounds from the lockdown emptiness of the previous year — the energy, noise and colour of supporters returning with them — there was one shade that dominated.

Overwhelmingly, football in 2021 was the year of the Blues.

In the club game Chelsea lifted the Champions League trophy, while in the Premier League the Sky Blues of Manchester City won their third in four years under Pep Guardiola and in Serie A the 'Nerazzurri' of Inter Milan ended Juventus's run of nine consecutive title wins.

It was not all blue of course. Atletico Madrid won their first LaLiga title in nine years and more predictably Bayern Munich claimed their ninth straight Bundesliga crown.

The pandemic had forced the Euros, the first pan-European version held in 12 different countries, to be postponed by a year but when it finally took place — with varying levels of stadium capacity — it delivered despite all the difficulties.

England had thought 'football was coming home' and their boisterous fans, many boozing and misbehaving in and around Wembley Stadium, sang their anthem with a sense of real belief. Gareth Southgate's young side beat Germany and Denmark in the knockout stages to reach the final but came up against an Italy side that under Roberto Mancini had been transformed.

Mancini turned Italy from a shambolic team that failed to qualify for the World Cup into the European champions in the space of three years. They needed penalties to beat England in the final but the fact they did so on the back of a 34-match unbeaten run was testament to the tactical and man-management skills of their coach.

Both sides will fancy their chances at next year's World Cup in Qatar, as will France who beat Spain 2-1 in the Nations League final in Milan in October thanks to goals from their deadly strike pairing of Karim Benzema and Kylian Mbappe.

Argentina will also head to the Gulf in November in confident mood having ended their 28-year wait for a major trophy with victory over Brazil in the Copa America final at the Maracana in Rio in July. Lionel Messi finally won his first senior title for his country and was the tournament's joint-top scorer with four goals — a major factor in him securing a record-extending seventh Ballon d'Or award.

Messi's former coach at Barcelona, Guardiola, must have thought his wait to bring a Champions League title to Manchester City was also about to end but Thomas Tuchel's Chelsea put paid to that in the final in Porto. Chelsea won the all-English final 1-0 thanks to a first-half goal from Kai Havertz as Tuchel completed a remarkable turnaround in fortunes for the west London club that he took charge of after the sacking of Frank Lampard in January.

City had to settle for another Premier League title, winning with a 12-point gap over Manchester United, and they end the year looking a strong bet to retain their crown.

United manager Ole Gunnar Solskjaer's hopes of lifting a trophy were foiled by defeat in the Europa League final to Villarreal and by November the Norwegian was out of a job despite having added Cristiano Ronaldo to his squad. The merry-go-round of managers saw Antonio Conte leave Inter Milan despite winning the 'scudetto' for the first time in 11 years and the Italian returned to the Premier League, joining Tottenham Hotspur in November.

Barcelona not only lost Messi to Paris St Germain in 2021 but their financial troubles were reflected on the field and they finished the year by failing to make it out of the group stage in the Champions League for the first time in almost 20 years.

Sport provided a massive adrenaline rush in 2021 with incredible stories to savour in an intense and often overwhelming year.
Sport
5 months ago

Argentina's Lionel Messi won the Ballon d'Or award for the best player in the world for a record-stretching seventh time on Monday, beating Robert ...
Sport
5 months ago