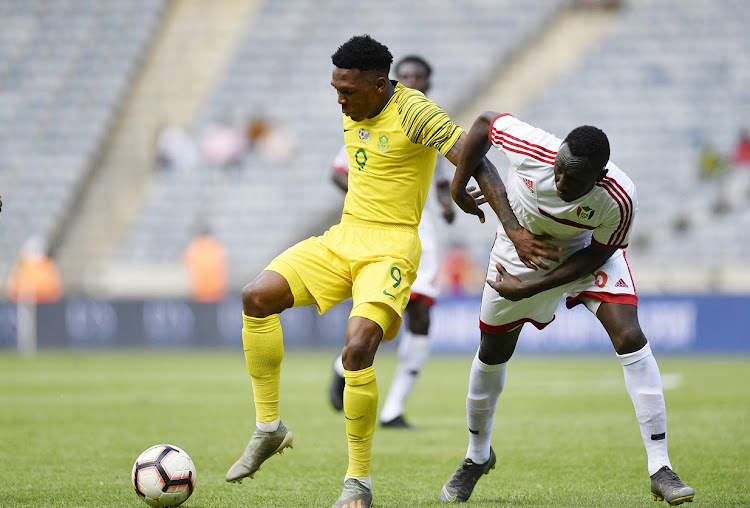 Lebo Mothiba of SA during the 2021 Africa Cup of Nations qualifiers against Sudan at Orlando Stadium on November 17 2019.
Image: Lefty Shivambu/Gallo Images

After almost two years on the sidelines due to knee and hamstring injuries, Bafana Bafana forward Lebo Mothiba saw his comeback game for French Ligue 1 side Strasbourg last week thwarted by bad weather.

But while it may have been a disappointment that he could not take to the pitch against Clermont, with the match last week Wednesday cancelled hours before kickoff, just to be on the team bus and in a match-day selection is a step forward for the 25-year-old.

Mothiba last played a first team fixture against Keagan Dolly’s Montpellier in February 2020 before a catastrophic knee injury kept him out for 18 months.

Then, as he was about to make a comeback in September this year, a hamstring problem meant more months on the sidelines.

He was finally able to take to the pitch in a reserve team game in the French fifth-tier earlier this month, doing enough in 45 minutes to suggest he is ready for a first team return.

Strasbourg coach Julien Stéphan included him for the trip to Clermont, but weather conditions with heavy fog meant the game was cancelled.

Strasbourg’s next game is away at Montpellier on Sunday in the French Cup, where Mothiba will hope to get onto the pitch. It would be some irony if his first and last game after such a long spell out was against the same opposition.

TimesLIVE has attempted to contact the forward to share his thoughts on his comeback, but without success.

His return should be a boost for Bafana coach Hugo Broos, given that he is in the right age-bracket for the new-look national team for the 2026 World Cup, which has missed a target-man style striker who can hold up the ball and bring others into play.

Broos is not necessarily consistent in how he assesses and selects players, so whether Mothiba will get a look-in remains to be seen, but if he is playing regularly in Ligue 1, as he was before injury, that should put him ahead of many others in the frame.

Mothiba was once a junior with Mamelodi Sundowns, but got his big break when he joined the Diambars Academy in Johannesburg, which has since closed down.

His progress there saw him move to current French champions Lille in 2014 and he spent his first two seasons working his way up through the academy.

He made his debut in a French Cup game against Excelsior in January 2017, before spending 12 months on loan at Ligue 2 Valenciennes, where he was an instant hit.

He netted 11 goals in 27 starts for the side before being recalled to Lille at the tail end of the 2017-2018 season, with the club in a relegation battle.

Bafana Bafana coach Hugo Broos seemed reluctant at times to call on overseas-based players during the Fifa World Cup qualifiers, though that could ...
Sport
5 months ago

His goals helped them to survive, but he opted to move to Strasbourg where he was guaranteed game time.

It proved a good decision as he scored 11 goals in 20 starts in his first season before injury cut short his second campaign.

Mothiba also made a stunning start to his Bafana Bafana career, when he scored in four of his first five games, including against Nigeria. The goals dried up after that and he has four in 14 appearances.

Mothiba is the only South African remaining in a first team at a club in one of Europe’s top five leagues, with Ligue 1 not so long ago also containing Dolly, Kermit Erasmus, Lebogang Phiri and Bongani Zungu.

Dolly and Erasmus are back in the PSL, Phiri has moved to Turkey and Zungu is at Ligue 2 Amiens after their relegation and a mediocre loan spell at Rangers in Scotland.

Bafana Bafana coach Hugo Broos said he told his bench after 15 minutes his team “could not win”, while his players battled to contain their emotions, ...
Sport
7 months ago

The SA Football Association (Safa) has said that a Ghanaian FA (GFA) statement containing a number of factual inaccuracies regarding Safa's appeal to ...
Sport
7 months ago

A strong, successful Bafana Bafana squad needs a supply line of quality players from Chiefs and Pirates
Sport
7 months ago

SA has a team again, Bafana Bafana coach Hugo Broos said, necessarily highlighting the immense positives that should emerge from the gloom after his ...
Sport
7 months ago