Maritzburg give Middendorp three matches to turn around barren run 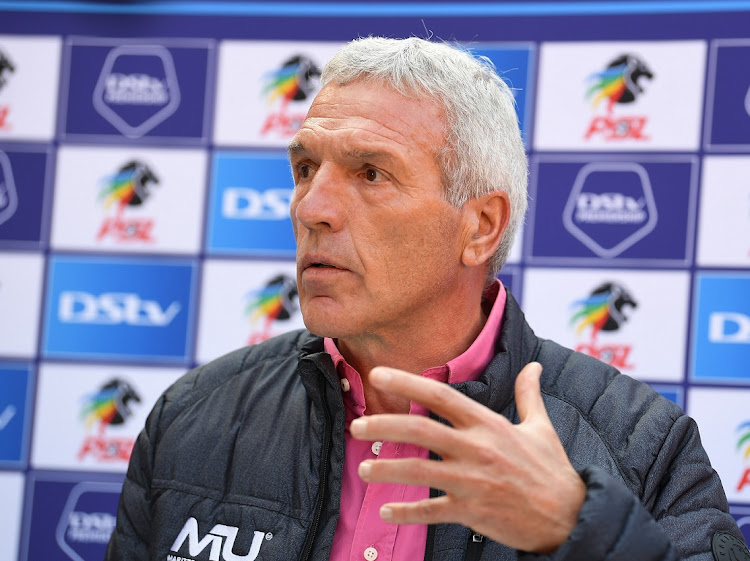 Maritzburg United chairperson Farook Kadodia has given coach Ernst Middendorp three matches to turn around a run of poor form that has seen the KwaZulu-Natal club flirting with a relegation battle in 13th place.

Kadodia said he also stressed, in a meeting with Middendorp on Thursday to put his performance under the microscope, that the coach needs to maintain a good rapport with his players, which has often been a downfall of the erratic-natured German.

United's 13th place at just past halfway on 18 matches is not disastrous, but 15 points is a low that has United concerned they will become embroiled in a gritty, pressured relegation battle. A little over 30 points after the 30 games is generally regarded as a safe mark from the drop or promotion playoffs spot.

Maritzburg last won on October 23, 1-0 at home to TS Galaxy. They lost five and drew five matches in their run-up to the Christmas and Africa Cup of Nations break.

“I did make it clear to the coach that the position we are in now is not acceptable, especially with the fact we've played 18 games,” Kadodia said.

“And also, I have worked with the coach on a number of occasions and I said that, 'Listen, I just think we need to see exactly what went wrong and let's see how we can put it right'.

“We brainstormed certain issues, and we think we can put those things right while also giving the coach that mandate that I'm not going to wait for four games — he's got to turn it around.

“We've got three consecutive home games back from the break, and while they are tough games I still believe the coach has the ability to turn it around.

“We went into a shell from about game three until games 16 or 17, and I think he needs a way of rectifying that. And I'm sure after my meeting with him things will change a lot.”

Maritzburg to put Middendorp under the microscope in meeting

Maritzburg United will put head coach Ernst Middendorp's performance in the 2021-22 season under the microscope in a meeting on Thursday, where ...
Sport
3 weeks ago

United's three games back from the break are all at Harry Gwala Stadium, against SuperSport United (February 15), Lamontville Golden Arrows (February 25) and Mamelodi Sundowns (March 5).

Middendorp has had a reputation at his long list of teams coached in SA of being technically sound and innovative, but also combustible and capable of rubbing his players the wrong way, which has a detrimental effect on results.

Kadodia, asked if he raised this issue with the coach, said he had, and that he had stressed that Middendorp needs a strong rapport with his players to achieve success.

“I'm not going to tell you what I said word for word, but I did in a nutshell say that the important thing is that we've got to maintain the team spirit in the camp,” United's chair said.

“And also that when we fought relegation in the past, whether under Eric Tinkler, Ian Palmer, or Ernst himself, the reality was what made the difference was the ability to ignite the players' spirit.”

Some coaches roped into the DStv Compact Cup are frustrated at the lack of information provided by the Premier Soccer League (PSL) on the logistics ...
Sport
3 weeks ago

Maritzburg United chairperson Farook Kadodia has confirmed he has had interest from European clubs in Bafana Bafana starlet Bongokuhle Hlongwane.
Sport
3 weeks ago

Six of the 16 top-flight clubs have made coaching changes already this season and it can be expected that there will be more casualties before May’s ...
Sport
3 weeks ago