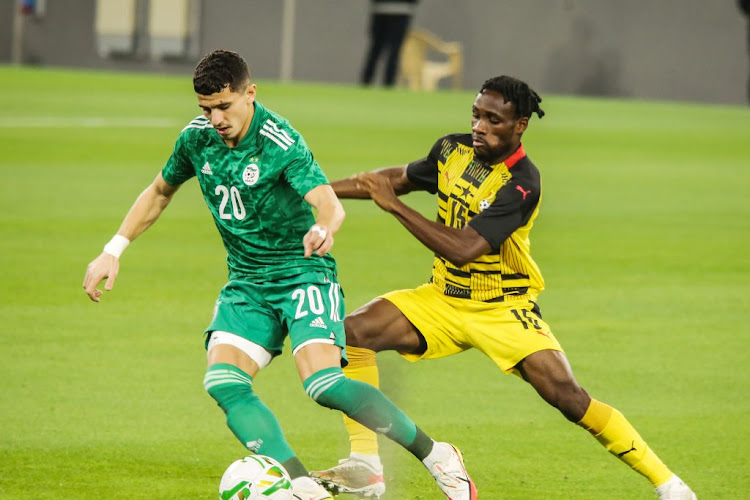 Joseph Paintsil of Ghana and Youcef Atal of Algeria during the friendly match between Algeria and Ghana ahead of the 2021 Africa Cup of Nations at Education City Stadium on January 05, 2022 in Al Rayyan, Qatar.
Image: Gabriel Ahiabor/Gallo Images

The threat of Mo Salah, Sadio Mane, Riyad Mahrez and Kelechi Ịheanachọ at this year’s Africa Cup of Nations finals in Cameroon is well known and they will no doubt have an influence on where the trophy ends up after the February 6 decider.

But there are plenty of other players to watch at the continental showpiece event, some who may be little known outside their own teams, but will be looking to make the kind of impact that turns them into genuine stars.

Others have already been feted as the next big thing in African football, and now is the time for them to prove their potential.

TimesLIVE pick our list of 10 players to keep an eye on in Cameroon.

Atal is a rampaging right-back for Nice in Ligue 1, who made his international debut in 2017 but has only really been a regular in the last two years. He was influential in helping Algeria to the title in 2019 but then sat out most of 2020 with a knee injury. He has been back to his best since his return though and a lot of their attacking play will no doubt come through him. Unlike many in the squad, he was born in Algeria and played for Paradou AC in his homeland before joining Nice in 2018.

Barrow is a forward for Bologna in Serie A having come through the development ranks at Atalanta, who have produced a number of star names in recent times. The 23-year-old has been a regular in Italy for the past three seasons and has five goals this season after making his move to Bologna permanent in a €14.5m transfer. Gambia are coached by former Free State Stars tactician Tom Saintfiet, who has built a good squad of players that will compete at their maiden Nations Cup. Barrow is the jewel in his crown.

Bayo only made his Guinea debut this year but has started with a bang and will likely be their lead forward in the competition. He plays for newly-promoted Ligue 1 side Clermont and has nine goals in 16 starts this season, placing him joint third on the scorers' list in the French elite league. The 23-year-old has been linked with a move to English side West Ham United and with his height and powerful frame, is a player to give any defence a physical working over.

This Mali generation has a number of outstanding talents, but perhaps the most exciting is the 23-year-old Haidara. The midfielder plays for RB Leipzig in the German Bundesliga, having arrived from sister club Salzburg, and is following a well-worn path of a number of top talents in Europe. He was hampered by a knee injury last season but has bounced back and impressed against the likes of Manchester City and Paris St Germain in the Champions League this campaign.

Goalkeeper Edouard Mendy and striker Famara Diedhiou will join captain Kalidou Koulibaly on the sidelines for Senegal’s opening match at the Africa ...
Sport
1 week ago

Hakimi is no stranger to the limelight but has led a rather nomadic existence around Europe’s top clubs before seemingly finally finding a settled home in this campaign. He has turned out for Real Madrid, Borussia Dortmund, Inter Milan and now Paris St Germain, all in the last four years! The right-back with an eye for goal has been a regular at all of those, bar perhaps Madrid, so his constant switching of clubs is a mystery. But there is no doubting his quality and the 23-year-old will be a defender with a real goal threat for Morocco.

The long-limbed centre-back has been a revelation for German Bundesliga side Bayer Leverkusen this season after his arrival from Club Brugge in Belgium, where he was previously a teammate of Percy Tau. The 21-year-old came through the famed ASEC Mimosas club in Abidjan and joined Hammarby in Sweden in 2019, before quickly making the switch to Belgium. He made his international debut in 2020 and has become an instant regular, with his athletic ability a standout feature.

The Manchester United youngster has made just a single appearance in the Premier League but is destined for big things. He is a product of the famed French Clairefontaine Academy that has produced the likes of Nicolas Anelka, Kylian Mbappé, Thierry Henry and William Gallas, but signed for United from Monaco in 2019. Born in France to Tunisian parents, he has opted to represent the African nation and helped them to the final of the recent Arab Cup. He has been likened to former United star David Beckham.

The 24-year-old striker has played for no less than 10 clubs already in his career, mostly due to a plethora of loan moves while he was with Italian Serie A side Roma. But he has not settled at Spanish second-tier side Almeria, where he has been banging in goals for fun. He has 31 goals in 55 starts over the past 18 months and is surely headed for a top tier side at the end of this campaign. He scored four goals in six appearances at the 2016 Olympic Games with Nigeria, and will now hope to make his mark with the Super Eagles in Cameroon.

Sulemana is a highly-rated winger with electric pace and great skill with the ball at his feet. The 19-year-old showed Bafana Bafana flames in that controversial final World Cup qualifier in Cape Coast in November with a number of mazy runs from which his teammates could not profit. He signed for French Ligue 1 Rennes at the start of the season after an excellent 18 months in Denmark at Nordsjælland and already has four goals in 11 starts this season — not bad for a teenager. He has the potential to be a huge player for the Black Stars in the future.

The 26-year-old midfielder has played in France, Spain, England and now Italy, where he is on loan at Napoli this season and already an important part of their side. The defensive midfielder started his career at Marseille, moving to English side Fulham and then on loan to Villarreal in LaLiga. He has impressed wherever he has been, and made his Cameroon debut under current Bafana Bafana boss Hugo Broos shortly after the side won the 2017 Nations Cup. He does not get many goals at club level, but has five in 35 caps for Cameroon.

The Confederation of African Football (Caf) have increased the prize money on the eve of the 2021 Africa Cup of Nations kickoff on Sunday, and said ...
Sport
1 week ago

Droves of armoured vehicles are patrolling the streets of Limbe in Cameroon's conflict-torn South West Region ahead of the Africa Cup of Nations ...
Sport
2 weeks ago

Guinea left three players at their training base in Rwanda after they tested positive for coronavirus, while the rest of their delegation departed ...
Sport
1 week ago

Gabon captain Pierre-Emerick Aubameyang tested positive for Covid-19 on arrival in Cameroon on Thursday, threatening his participation at the Africa ...
Sport
1 week ago