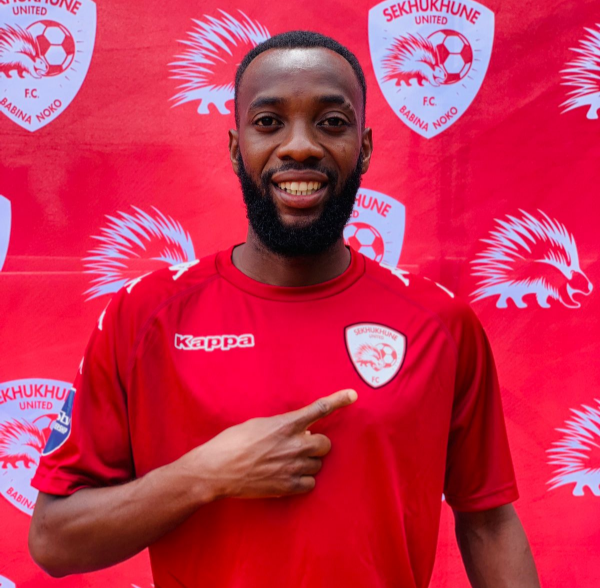 The arrival of Shonga, whose career has failed to ignite since he arrived in the country to play for Orlando Pirates four years ago, Rusike and Mokoena, is a serious statement going into the second round.

Other teams that the 25-year-old Shonga played for in the PSL are Tshakhuma Tsha Madzivhandila (TTM) and Cape Town City, and Sekhukhune coach McDonald Makhubedu will he hoping that he can rediscover his scoring form.

Makhubedu is also expecting big things in front of goal from the experienced Rusike, who will be expected to lead the line with Shonga in the second round of the season, while right-back Mokoena will add strength at the back.

“It is an awesome feeling to be back in the DStv Premiership,” Shonga said. “The environment is totally different to that at Ismaily in the Egyptian Soccer League. SA is more suitable to playing football because I feel at home here and my priority is to help the team accumulate more points so as to finish in a respectable position.

“I will work hard to get my form back so that I can contribute immensely to the team’s success in the second round of the season.”

Mokoena said he is excited to join Sekhukhune.

“I would like thank the Sekhukhune United technical team and management for allowing me to be part of the club and I will work hard to contribute to the success of the team and their mission to win trophies,” Mokoena said.

Rusike said he is looking forward to reviving his career at the Limopo club.

“I am looking forward to what is expected to be an exciting second round of the season. I will do my best to ensure that Babina Noko stay where they belong.”

Sekhukhune reached the Christmas break in eighth place in the Premiership with 26 points from 17 matches after seven wins, four draws and six defeats.

Six of the 16 top-flight clubs have made coaching changes already this season and it can be expected that there will be more casualties before May’s ...
Sport
2 weeks ago

SA domestic football has been dominated by Mamelodi Sundowns in 2021 as they romped to the DStv Premiership and MTN8 titles and look odds-on to ...
Sport
3 weeks ago

Young SuperSport United players who have been drafted into the senior squad have excelled after being thrown in the deep end, Andre Arendse said ...
Sport
1 month ago