Forwards do the heavy lifting as Cheetahs down Griquas 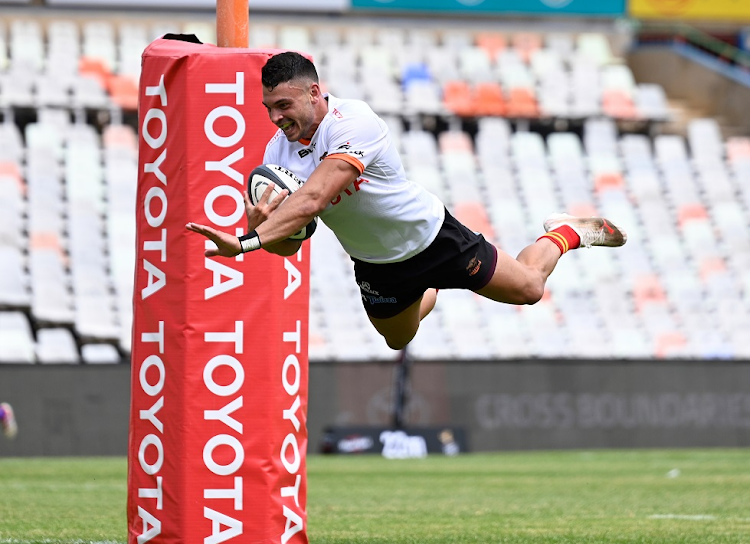 David Brits of the Cheetahs during the Currie Cup match against Griquas at Free Stae Stadium in Bloemfontein on January 15 2022.
Image: Johan Pretorius/Gallo Images

Desperate to atone for their poor showing in last year's Currie Cup the Cheetahs made their experience count to down Griquas at the start of their new campaign, 30-20 in Bloemfontein on Saturday.

Their forwards did much of the heavy lifting as they quelled the threat of their neighbours, who showed signs of a revival for a few minutes either side of the half time whistle.

In the end though, the Cheetahs benefited greatly from their opposition's high penalty count.

The Cheetahs struggled to make the inroads in the first half-hour as the wet conditions served to rein them in. In fact the Cheetahs, who held a 23-3 advantage at the break, only made meaningful progress on the scoreboard in the last 10 minutes of the first half.

The Cheetahs had to adapt their game to make headway. It was through that pragmatism that they got over the try line first. They marched their opposition back through a maul before Marnus van der Merwe peeled away and used brute strength to cross the try line.

Barely two minutes later they killed off the match as a contest when they surged up field before Clayton Blommetjies delivered a telling cross-kick. David Brits eventually rounded off the move by stepping in and straightening to sprint clear for the try.

Griquas pressed hard to register a meaningful score before the break but they came up short.

The increased resolve was evident in the visitors after the restart too. No.8 Ruan Steenkamp barged over from a maul, while Luther Obie brought more respectability to the scoreline at the death.

Former Lions and Springbok scrumhalf Ross Cronje has announced his retirement from rugby.
Sport
1 week ago

The Bulls will start the defence of their Currie Cup crown with a tricky trip to the highly unpredictable Pumas at Mbombela Stadium in what will be ...
Sport
1 week ago

After a stop-start campaign last season where he struggled with persistent injures, Springbok and Bulls prop Lizo Gqoboka is looking forward to a ...
Sport
1 week ago

Stormers in for festive graft

The Stormers ended the year on a distinct low when they lost at home to what was widely thought to be SA's weakest entrant in the United Rugby ...
Sport
1 month ago