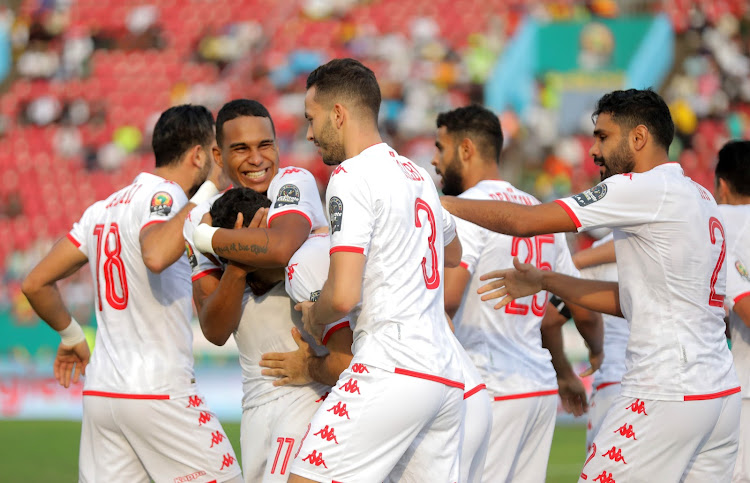 Tunisia are one of the outside favourites.
Image: @CAF_Online/Twitter

Hamza Mathlouthi and Wahbi Khazri scored goals inside the opening nine minutes to set up a comfortable 4-0 victory for Tunisia over Mauritania in their Africa Cup of Nations (Afcon) Group F match at the Limbe Stadium on Sunday.

Khazri added another in the second half and then laid on a fourth for Seifeddine Jaziri as Tunisia were vastly improved, having lost their opener to Mali in controversial fashion when Zambian referee Janny Sikazwe erred by twice ending the game before the 90 minutes.

Tunisia, who missed a late penalty from Youssef Msakni, have three points from their opening two matches and are in third in the group behind Gambia and Mali, who have four points each.

The top two teams in each group advance to the second round, along with the four best third-place finishers across the six pools.

Mauritania rarely troubled their opponents and look among the poorest teams in the competition as their defence was carved open on numerous occasions.

They fell behind after four minutes when they failed to clear their defensive lines and the ball fell to Mathlouthi on the edge of the box, who crashed a first-time shot into the bottom corner of the net.

It was 2-0 five minutes later as the Mauritanians allowed Khazri far too much time and space and the St Etienne forward picked his spot with a low finish from 10 yards.

That score remained the same until just past the hour-mark when neat interplay between Ghailene Chaalali and Khazri led to the latter being presented with a simple side-foot finish.

Tunisia added a fourth two minutes later when Khazri turned provider, laying on an excellent through-ball for Jaziri to score.

They might have had a fifth too, but for the second time in as many games missed a penalty, this time through substitute Msakni as he struck the post after Mauritania were penalised for a handball.

Lack of drive, hunger and the shortage of coaches qualified to develop goalkeepers have been cited by two of SA’s legendary goalkeepers as some of ...
Sport
5 months ago

It is the responsibility of those who love and care about Africa to defend her from those who consistently dismiss the continent as a canvas of ...
Sport
5 months ago