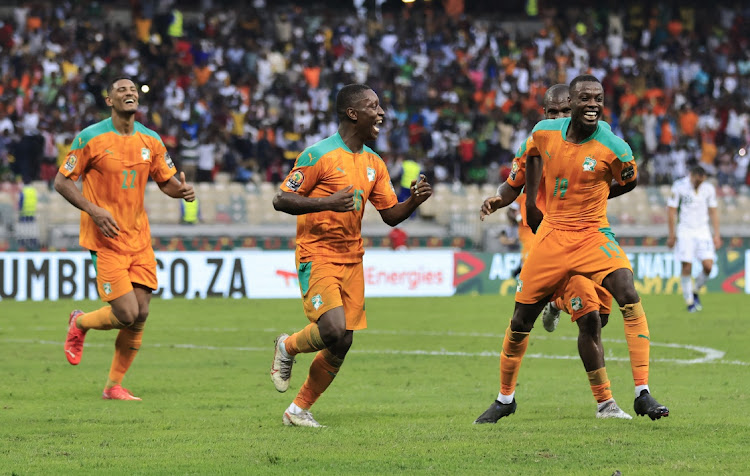 Ivory Coast's Nicolas Pepe celebrates with his teammates after scoring a wonderful solo goal against Algeria in Douala on January 20 2022.
Image: REUTERS/Thaier Al-Sudani

Algeria's 35-game unbeaten run was ended by Equatorial Guinea in a stunning upset in their last match, and they were outplayed again by the impressive Ivorians, who might have had more goals with better finishing.

They are joined in the second round by Equatorial Guinea (six points), whose 1-0 victory over Sierra Leone eliminated the latter.

When they won their only other Afcon title in 1990, Algeria also exited in the first round of the next tournament after a 3-0 loss to the Ivorians, who went on to lift the trophy.

'It's not correct', says Nathi Mthethwa on journalists not attending PSL games

Sports minister Nathi Mthethwa says “it is not correct” and “it does not sound right” that football journalists have not been allowed to attend live ...
Sport
4 months ago

He doesn’t like to talk about it because people don’t believe him but former Ajax Cape Town mercurial midfielder Mkhanyiseli Siwahla trained at the ...
Sport
4 months ago

The tiny Comoros Islands have faced a tense 48-hour wait to find out whether their shock win over Ghana in the Africa Cup of Nations on Tuesday will ...
Sport
4 months ago

Egypt beat neighbours Sudan 1-0 in Yaounde on Wednesday to ensure their progress to the knockout stages of the Africa Cup of Nations, finishing ...
Sport
4 months ago

Striker Sadiq Umar scored his first goal for Nigeria as they eased to a 2-0 victory over Guinea-Bissau in the Africa Cup of Nations on Wednesday to ...
Sport
4 months ago