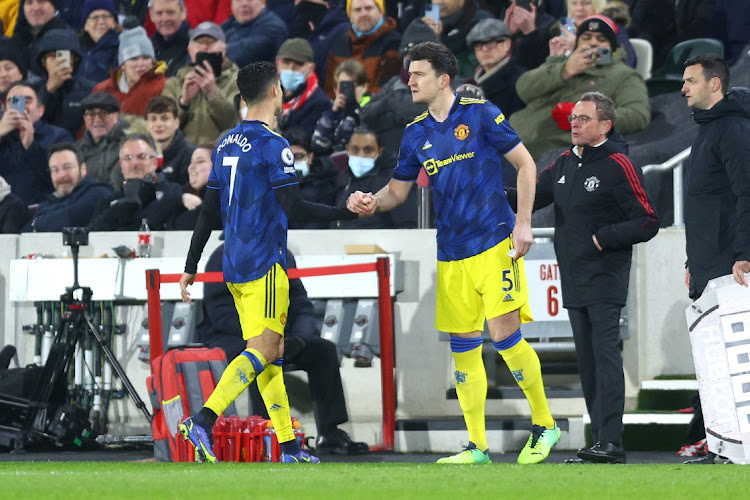 Cristiano Ronaldo was not impressed when he was substituted in the second half and replaced with defender Harry Maguire with Manchester United leading 2-0 at the Brentford Community Stadiu on January 19, 2022.
Image: Clive Rose/Getty Images

Manchester United interim manager Ralf Rangnick slammed his side's shoddy first-half performance after a flattering 3-1 victory away to Brentford in the Premier League on Wednesday.

The German also had to deal with a Cristiano Ronaldo tantrum after substituting the Portuguese forward in the second half.

Lacklustre United were outplayed by Brentford in the first half and were indebted to keeper David De Gea but goals by Anthony Elanga, Mason Greenwood and Marcus Rashford capped a much-improved second-half display.

Al Ahly head coach Pitso Mosimane says he has "given up" on Europe after not making the best Fifa men’s coach award shortlist for 2021.
Sport
5 months ago

It was a vital win for United and keeps them in the thick of the battle for a top-four finish, but Rangnick was not impressed by what he saw in the opening 45 minutes.

"You have to be honest, without David and his brilliant saves it would have been difficult," Rangnick told reporters.

"We were sloppy in our passing, not strong enough in the tackles, losing the 50-50 challenges and didn't win a single second ball. When we did counter-attack we were too nervous.

"Brentford were aggressive and brave and they were all the aspects we spoke about at halftime."

The EFF said if the picket does not yield the desired results, the party will protest at the offices of the SA Football Association and the Premier ...
Sport
5 months ago

Whatever Rangnick said at halftime clearly worked as United were a different proposition after the break, even if the scoreline was scarcely credible.

Yet the win that lifted United to within two points of fourth-placed West Ham United with a game in hand, was overshadowed by Ronaldo's reaction to being hauled off and replaced with defender Harry Maguire when the score was 2-0.

Ronaldo, who missed the last two games because of a niggling injury, took an age to walk off the pitch, scowling at United's coaching staff and throwing his jacket down in anger, before continuing his debate from his seat.

"His reaction was 'why me?'... I said to him I have to take a decision in the interests of the club because we had a situation at Villa where we were 2-0 up and drew 2-2 and I was angry at myself for not switching to a back five.

The SA Football Players Union (Safpu) has thrown its weight behind the EFF’s march to sports minister Nathi Mthethwa’s offices in Pretoria on ...
Sport
5 months ago

"I decided to switch to a back five with Harry Maguire. He was not happy, he is a goalscorer and wanted to stay on and score a goal himself. But it was important to be compact.

"I said to him I understand, but maybe in a couple of years when you are a head coach you will take the same decision.

"I didn't expect him to hug me... but I have no issue with him whatsoever."

His opposite number Thomas Frank was understandably frustrated at the outcome, saying his team had "destroyed" United in the first half.

Rangnick had some sympathy, praising Brentford's display and saying his players should learn from them.

"I want us to play like Brentford in the second half, I have great respect for what they have done here," he said.

"You wouldn't see that in Germany where a team not in the top five or eight would play that kind of football.

"We have to develop in that direction and if we do we can play the whole game like that, not just 45 minutes."

We are more than a week into the Africa Cup of Nations finals, which have not always hit the great heights as a spectacle but have provided many ...
Sport
5 months ago

Minister of sport Nathi Mthethwa has described the planned picket by the EFF outside his office in Pretoria on Thursday as ill-advised and populist ...
Sport
5 months ago

Egypt beat neighbours Sudan 1-0 in Yaounde on Wednesday to ensure their progress to the knockout stages of the Africa Cup of Nations, finishing ...
Sport
5 months ago

Striker Sadiq Umar scored his first goal for Nigeria as they eased to a 2-0 victory over Guinea-Bissau in the Africa Cup of Nations on Wednesday to ...
Sport
5 months ago