Equatorial Guinea through to third Afcon knockout stages in a row 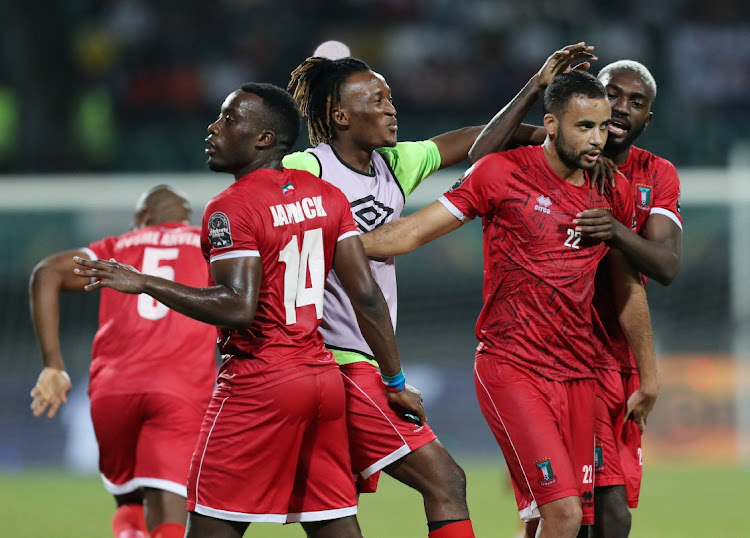 Equatorial Guinea have now gone through to the knockout stages in all three of their tournament appearances.
Image: REUTERS/Mohamed Abd El Ghany

Sierra Leone’s veteran striker Kei Kamara missed a late penalty to scupper their chances of reaching the next round of the Africa Cup of Nations as they lost 1-0 to Equatorial Guinea on Thursday.

Pablo Ganet’s 38th-minute strike ensured Equatorial Guinea finished second in Group E and progressed, but Sierra Leone might have gone through as one of the best third-placed finishers if they had forced a draw.

They were awarded a last-minute penalty, but Kamara’s effort was saved by Equatorial Guinea’s 20-year-old goalkeeper Jesus Owono.

The result also means the Comoros Islands are through as one of the best third-placed finishers after their surprise 3-2 win over Ghana on Tuesday.

Equatorial Guinea finished the first round with a second successive win and six points, one behind group winners Ivory Coast.

Nicolas Pepe scored a superb solo goal as Ivory Coast thumped Algeria 4-1 to send the defending champions crashing out of the Africa Cup of Nations ...
Sport
4 months ago

Sierra Leone were third on two points with defending champions Algeria bottom of the standings.

"To come second in this strong group is a real achievement for us," said Equatorial Guinea captain Carlos Akapo.

Gannet struck at the end of a clever routine corner as the Sierra Leone defence backed off and allowed him to thrash the ball home from the edge of the penalty area.

Sierra Leone needed to score to stay in the tournament but struggled with fatigue and created few chances before substitute Issa Kallon was bought down.

'It's not correct', says Nathi Mthethwa on journalists not attending PSL games

Sports minister Nathi Mthethwa says “it is not correct” and “it does not sound right” that football journalists have not been allowed to attend live ...
Sport
4 months ago

Sierra Leone celebrated the awarding of the penalty as if they had scored, but watched in horror as Kamara’s effort was saved by Owono.

The match ended seven minutes into stoppage time when Equatorial Guinea’s Iban Salvador was given a penalty after being tripped in the final attack of the game, but the referee changed the decision to a free kick on the edge of the area after several minutes' delay on the advice of VAR.

Equatorial Guinea have now gone through to the knockout stages in all three of their tournament appearances and will meet the winners of Group F, to be decided later on Thursday, in Limbe next Wednesday.

"The penalty miss is difficult to take, it could have changed everything for us," Sierra Leone coach John Keister said.

The Azanian People's Organisation (Azapo) has written to Fifa president Gianni Infantino requesting an investigation into the snub of Al Ahly coach ...
Sport
4 months ago