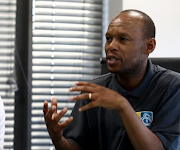 Image: Masi Losi Jabu Mahlangu, who has played for both Kaizer Chiefs and Orlando Pirates, has been in a car accident.

Mahlangu was in Far East Rand Hospital in Brakpan after the crash in the early hours of Saturday morning in Benoni, a lawyer for Mahlangu confirmed on Saturday.

The lawyer, Mabu Marweshe, from a law firm that represents Mahlangu, Marweshe Attorneys, said he could not give an update yet on the ex-midfield star's condition.

Jabu Mahlangu aka Jabu Pule rushed to hospital after he was involved in car accident.

“As soon as the doctors have given the go-ahead to consult with us we will be able to provide more information.” pic.twitter.com/IN9hcM0uI4

A source close to Mahlangu had told TimesLIVE that his BMW 4 Series had apparently been in a collision with a minibus taxi.

The pictures being circulated on social media show a car that looks like a wrecked BMW, and an overturned and heavily damaged Toyota Hiace Quantum.

Initial indications are that more than one person other than Mahlangu was injured and also admitted to hospital.

He has been working as a brand ambassador for SuperSport United, and a TV football analyst on pay sports channel SuperSport.