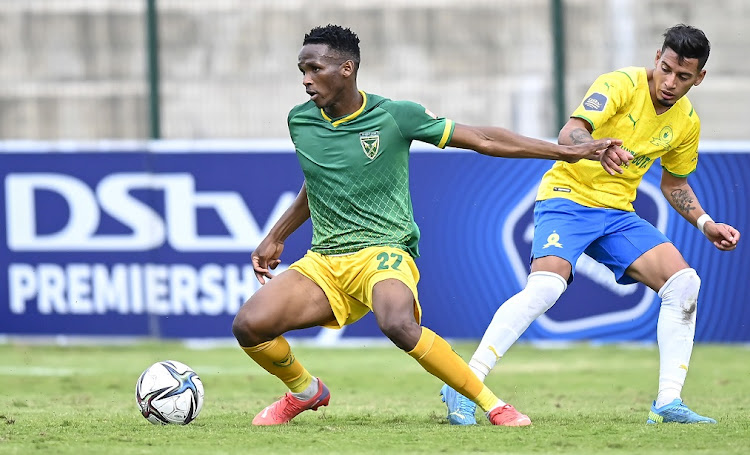 Lamontville Golden Arrows will be in the dock with the Premier Soccer League disciplinary committee (DC) next week over allegedly fielding an ineligible player in DStv Premiership and MTN8 matches this season.

Simo Mbhele, 23, was registered with the league at the start of the campaign and played six games in the Premiership and the two legs of the MTN8 semifinal loss to Mamelodi Sundowns.

If found guilty the club face losing the points gained in those league games, which would send them tumbling towards the relegation zone and potentially boost rivals.

Mbhele played in the victory over Marumo Gallants, as well as the draws with Sekhukhune United, AmaZulu and TS Galaxy. He also featured in losses to Mamelodi Sundowns and SuperSport United.

That Sundowns game on October 20 was his last appearance before Golden Arrows were notified of the issue and he has not been seen since.

PSL prosecutor Zola Majavu has confirmed Arrows pleaded not guilty this week and “the matter was postponed to Wednesday, January 26”.

Arrows went to the Christmas and Africa Cup of Nations break in 10th place in the Premiership with 21 points from 16 games.

The Durban club won one, drew three and lost two of their league games fielding Mbhele, gaining six points. So if all of those matches were changed to defeats for Arrows, they would effectively have six points deducted. That would see them drop to 15 points, which would leave Arrows in 13th position, just two points above the relegation zone.

You would think Abafana Bes’thende have the squad to get out of any relegation trouble, but just how an outcome of having points deducted might affect the psyche of the players is perhaps the great unknown.

So how did we get here and what is the precedent for a sanction?

Reports suggest KZN Academy product Mbhele was improperly registered when he returned to SA after the 2020-21 season to sign for Arrows because he did not have an International Clearance Certificate from his former club in Portugal, third-tier Sociedade União 1º Dezembro.

Orlando Pirates have been told to appear before a disciplinary committee hearing for the incident in which TS Galaxy chair Tim Sukazi was denied ...
Sport
5 months ago

As for the precedent, the most recent case of an ineligible player, though the circumstances were slightly different, was the issue with Tendai Ndoro and Ajax Cape Town.

In that instance Ajax were found guilty of improperly fielding the Zimbabwe international striker as they were Ndoro’s third club of the 2017-18 season, in contravention of FIFA regulations that say players may only feature for two teams in a campaign.

The PSL actually sided with Ajax on that matter, but the case went to arbitration and after a long and drawn-out battle, the results from three of the matches in which Ndoro played (and the clubs protested) were awarded 3-0 to their opponents.

Were that to happen in this case it would mean a shake-up of the PSL table, especially near the foot.

What is not known is whether any teams realised the issue and played under protest, which could make all the difference in the sanction if Arrows are found guilty. A precedent has been that when teams protest an ineligible player at the time of the match, they can be awarded a 3-0 win.

With the speed in which the excellent Majavu is moving through DC cases, we are likely not to have to wait long to find out one way or another.

Kaizer Chiefs’ matter of their two matches they failed to honour in December due to Covid-19 has gone to arbitration at the SA Football Association ...
Sport
5 months ago

Cape Town City midfielder Mpho Makola has been suspended from football for two months for pushing assistant referee Cladwin Baloyi after his team's ...
Sport
5 months ago

Cape Town City have been fined R100,000, half of which was suspended, in the disciplinary committee (DC) hearing for the match they played against ...
Sport
5 months ago

New Premier Soccer League (PSL) prosecutor Zola Majavu says he is formulating a plan to alleviate the backlog in disciplinary cases caused by the ...
Sport
5 months ago