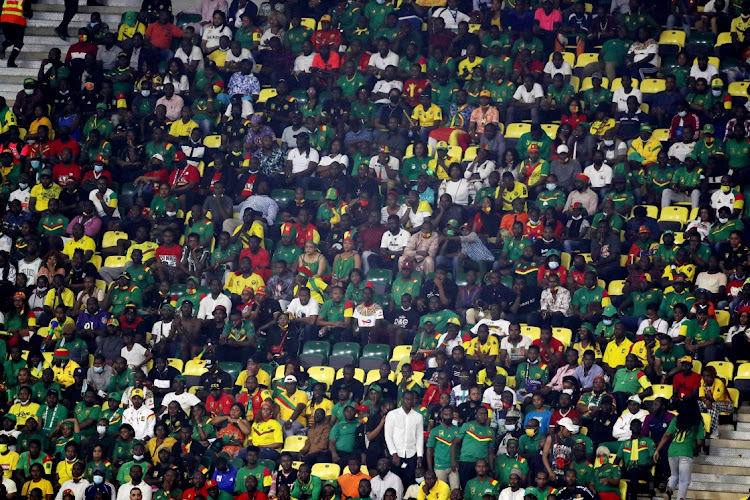 General view of Cameroon fans inside the stadium. At least six people died in a stampede outside the stadium after the game between Cameroon and Comoros.
Image: REUTERS/Mohamed Abd El Ghany

The deaths of at least eight people in a stampede at Yaounde’s Olembe Stadium on Monday was a severe blow to an already troubled Africa Cup of Nations (Afcon) tournament, which looked to be going ahead on Tuesday despite the disaster.

At least 38 people were also injured as spectators rushed to get into the host nation's last-16 game against Comoros, throwing a tournament beset by problems into further crisis.

It is, however, expected to continue with last-16 matches scheduled on Tuesday in Bafoussam and in Yaounde, at the Ahmadou Ahidjo Stadium.

Team officials told Reuters they had not been advised otherwise.

At least 6 dead in stampede outside soccer match in Cameroon

At least six people have died and more than 40 were injured in a crush outside an Africa Cup of Nations match Monday, Cameroonian authorities said.
Sport
3 months ago

Images shared on social media, which Reuters could not immediately authenticate, showed screaming fans being crushed at an entrance gate.

There were also images of spectators streaming into the stadium on Monday through a small gap, and eye witnesses said many attempted to scale walls or push down gates to gain access.

The casualties were confirmed in a government statement and the Confederation of African Football (Caf) has started an investigation.

“Caf is currently investigating the situation and trying to get more details on what transpired.

“We are in constant communication with the Cameroon government and the local organising committee,” the ruling body said.

Hosts Cameroon made heavy work of beating 10-man Comoros Islands 2-1 on Monday night to advance to the African Cup of Nations (Afcon) quarterfinal ...
Sport
3 months ago

The new 60,000-seater Olembe Stadium, which hosted the opening game and is scheduled to stage the final on February 6, had been the subject of controversy with works continuing right up to the start of the tournament.

Caf was so concerned about the readiness of the venue, plus Cameroon’s general lack of preparations, that it held an emergency meeting last month to discuss cancelling the tournament.

This edition of the African championship, the continent’s biggest sporting event, was twice postponed, in 2019 when Caf found Cameroon was not ready and moved it to Egypt, and again last January because of the Covid-19 pandemic.

Cameroon had been awarded the finals in 2014 and built new stadiums in Bafoussam, Douala, Limbe and Yaounde.

What it hoped would be a positive advertisement for the central African country, however, has proven anything but.

On Sunday, a fire engulfed an upmarket nightclub in Yaounde, killing at least 16 people and injuring eight others, the government said.

“The incident was caused by the explosion of fireworks usually used in the nightclub,” said the government, adding that this had caused a fire to start in the ceiling, leading to further explosions.

Mampara of the week: André Ayew

Ghana footballer André Ayew is the son of the illustrious Abedi Pele, one of the most respected football icons to fly the flag for his country and ...
Opinion & Analysis
3 months ago