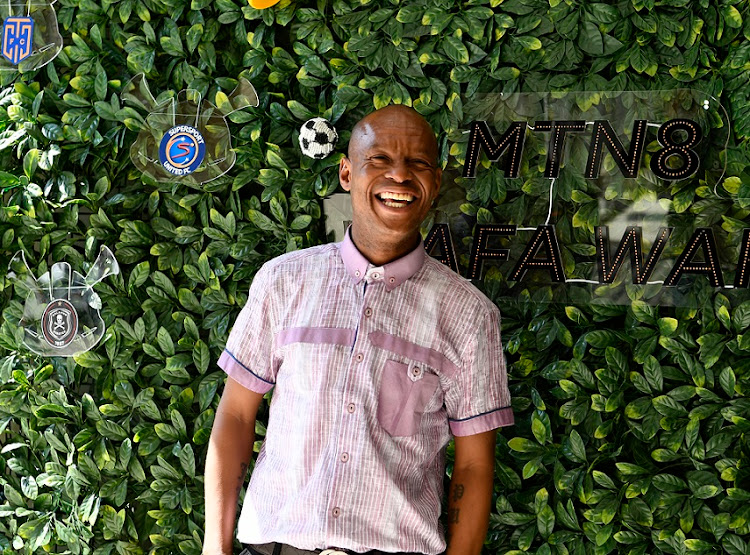 Jabu Mahlangu during an MTN8 media launch. Mahlangu was in a car accident in the early hours of Saturday morning.
Image: Lefty Shivambu/Gallo Images

Jabu Mahlangu has had a charge of fleeing the scene of the accident added to negligent and reckless driving regarding the crash involving the BMW he was driving and a minibus taxi, the Ekurhuleni metro police department (EMPD) has confirmed.

A charge of fleeing the scene of a crash reportedly carries a maximum sentence of nine years' imprisonment or a fine of R180,000.

Ex-Kaizer Chiefs, Orlando Pirates and SuperSport United star Mahlangu collided in the BMW 4 Series he was driving, along with a female passenger, with a Toyota Hiace Quantum in Benoni in the early hours of Saturday morning. Two people in the taxi were seriously injured and 11 slightly, the EMPD said.

Lawyers for Mahlangu on Saturday said he was admitted to Far East Rand Hospital in Springs, but that they could not confirm his condition.

EMPD spokesperson Lt-Col Kelebogile Thepa said Mahlangu said when EMPD and emergency services personnel arrived at the crash Mahlangu was “not at the scene”, appearing to confirm media reports Mahlangu had allegedly fled the crash site.

“It has further been established that he was not even part of all those injured and who needed to be transferred to hospital. So an inference can then be drawn that, in the absence of any of the following, he would have fled the scene and then that is a criminal offence,” Theta told TimesLIVE.

“A case docket has been registered with the Benoni SA Police Service (SAPS). As of now, we do confirm that there are two charges brought against him, one being the reckless and negligent driving and the other being fleeing the scene of the accident.”

Theta added: “But what has been alleged that he is somewhere admitted to a hospital — no. He doesn't even form part of the people who were injured.

“There is a legal duty that when a person is involved in an accident, that they stop immediately and ascertain the nature of injuries and call the relevant people — the Metro Police or ambulances should there be a need.

“Reasons for leaving the scene would have to be established [for someone to be charged for it]. If he left there in his private capacity to flee the scene then that is defeating the ends of justice. If it's for the purpose of medical attention then such is justifiable.”

Former Kaizer Chiefs and Bafana Bafana star Jabu Mahlangu is in hospital after a car accident in Benoni, an attorney for the players has said.
Sport
6 months ago

Theta said a case of negligent or reckless driving — the initial charge against Mahlangu — is opened as a standard procedure when a crash is serious or involves injuries or fatalities.

“With the investigation it would then be determined where the negligence was lying — determining which if any of the drivers were at fault.”

Such a determination would be made on the basis of forensics expertise and an investigation including interviewing witnesses.

“The case registered against Jabu Mahlangu is one of reckless and negligent driving only on the basis that the nature of the injuries sustained in the crash is serious,” Theta said.

Later the Theta checked with the EMPD officers involved, who informed Theta of the added charge of fleeing the scene.

Mabu Marweshe — of Marweshe Attorneys, the firm who represent Mahlangu — who has acted as a spokesperson for the ex-player since the crash, could not be reached for comment.

“But our office has not been made aware of any case that is opened against Jabu,” Mathe said via a WhatsApp message.

“We do not know what they are talking about when they say he 'fled'. That's a dangerous narrative as Jabu was in hospital with some of the injured people from the other vehicle.”

He added: “We will have to wait yo hear from the police regarding the case, but until then we cannot comment on it.”

Mahlangu's cellphone went straight to voicemail and he did not respond to a WhatsApp asking for comment.

In 2000‚ coach Ephraim “Shakes” Mashaba took an U23 side‚ better known as Amaglug-glug‚ to the Sydney Summer Olympics in Australia in what was the ...
Sport
1 year ago

Jabu Mahlangu has once again stuck his neck out and said he does not believe that his former club Kaizer Chiefs will win the league this season.
Sport
2 years ago