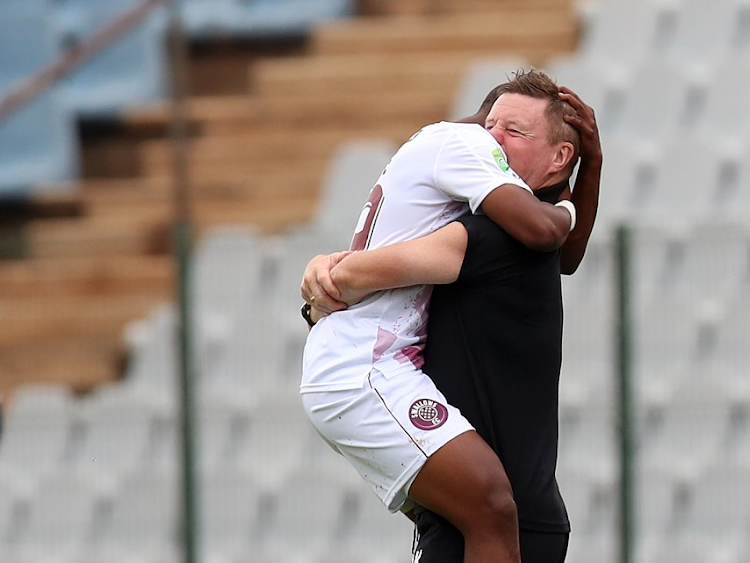 Sphesihle Mbhele of Swallows FC celebrates with coach Dylan Kerr in the Nedbank Cup last-32 match against TS Sporting at Dobsonville Stadium in Soweto on the February 5 2022.
Image: Muzi Ntombela/BackpagePix

Swallows FC rallied from a goal down at the break with a convincing second-half performance to see off TS Sporting 2-1 in the last-32 of the Nedbank Cup at Dobsonville Stadium on Saturday.

Sibusiso Fakude put Sporting ahead in the 20th minute. Two quick strikes after the break by Yagan Sasman (48th) and substitute Ruzaigh Gamildien (53rd) earned Swallows their place in the last-16.

The Birds were dominant in the opening half, but patchily and without the maximum commitment needed when the aim is to avoid underestimating lower league opponents. They paid for it going to the break a goal down.

Swallows had looked in control from the kickoff. Kagisho Malinga beat Sporting left-back Sithembiso Ngobe and struck onto the foot of the upright. Then Ngobe miskicked across his area to Monnapule Saleng, who fed Mwape Musonda to shoot tamely at goalkeeper Samkelo Mbambo.

Sporting grabbed the lead against the run of play. Matome Mabeba's corner was drilled in low to get a touch-on by Mohau Mokate, Comoros striker Ibroihim Youssouf's header forcing a save by Thela Ngobeni. Fakude was on hand to bury the rebound.

Still Swallows pushed, Lehloghonolo Matlou chipping Mbambo and Rooi Mahamutsa clearing from in front of the line, then Musonda miscuing a volley onto the tip netting.

Coach Dylan Kerr might have some words for his charges at the break, as the Birds came out far more forceful, and soon put the scoreboard to rights. The coach rung the changes, Gamildien, Sphesihle Mbele and Dillon Solomons replacing Musonda, Matlou and Malinga.

Saleng's free-kick from the right edge of the box found the head of Gamildien, whose flick-on was stabbed in at the post by Sasman.

Swallows' second was a textbook goal orchestrated by the substitutes, Mbhele threading an artistic pass to release Solomons on the right, who squared for Gamildien to strike past Mbambo.

Bradley Ralani scored on his Mamelodi Sundowns debut as the Brazilians strolled into the last-16 of the Nedbank Cup with a comfortable 4-0 win over ...
Sport
6 months ago

University of Pretoria scored two goals in a minute late in the game to seal a 2-0 victory over last year’s beaten finalists Chippa United and ensure ...
Sport
6 months ago

Swallows coach Kerr: Birds can soar in top half of the table

Dylan Kerr believes Swallows FC have the potential to fight at the top end of the table as he seeks to reignite the fortunes of the club in the ...
Sport
6 months ago

Mngqithi believes Sundowns have capacity to deal with fixture pile-up

With a punishing programme that starts next week with three matches in eight days, Mamelodi Sundowns coach Manqoba Mngqithi says they have the ...
Sport
6 months ago