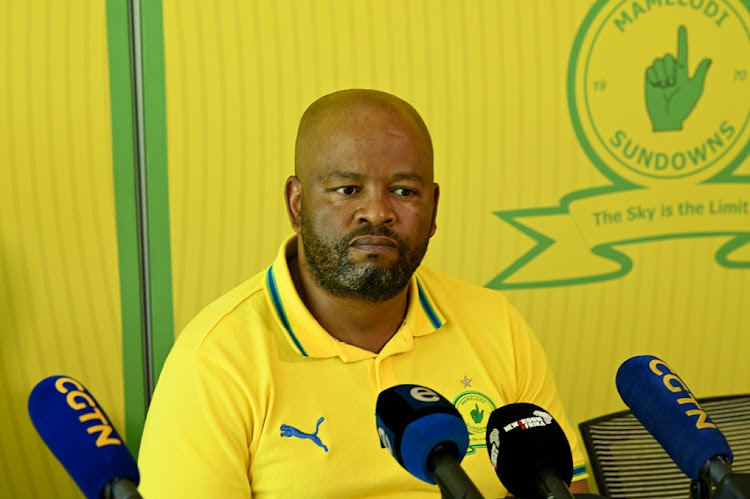 Mamelodi Sundowns coach Manqoba Mngqithi during a press conference at the team's base in Chloorkop, Johannesburg on February 9 2022.
Image: Lee Warren/Gallo Images

Mamelodi Sundowns continue to be the standard bearers for SA teams in the Caf Champions League, and having brought up a new milestone in last weekend’s victory over Al-Hilal in their Group A opener, are seeking a Sudanese “Double” on Saturday.

When Themba Zwane netted early against Al-Hilal it was Sundowns’ 200th goal in the Champions League, with the second 100 of those coming in the last five-and-a-half years.

It took The Brazilians 22 years to reach a century of goals in Africa’s elite club competition, but the pace of their scoring his quickened since then as they have regularly made it into the pool stages of the competition and beyond in the past seven years.

The late Bennett Masinga scored Sundowns' first Champions League goal against Lesotho side Arsenal in 1994, and Khama Billiat their 100th in the semifinals versus Zesco United in 2016.

It is a sign of their consistency and prowess on the continent that they have achieved the feat so quickly again. The first 100 goals took 64 games and the second only 60, but the fact they have played so many matches since 2016 is a massive factor for their current campaign.

It speaks of the experience, not just of the players, but also the technical team led by co-coaches Manqoba Mngqithi, Rulani Mokwena and Steve Komphela, and of a side battle-hardened for Caf club action.

They have received a stroke of luck for the coming game, which sees them take on Sudanese side Al-Merrikh on Saturday at Al Ahly’s Al Salam Stadium in Cairo.

They will then spend the week in the Egyptian capital before a meeting with Ahly at the same venue next Friday.

There are major benefits in that arrangement for Sundowns. They are playing the Al-Merrikh game in neutral territory after the latter’s stadium was banned by the Confederation of African Football. That takes away home advantage.

Downs also get to train and play at the same venues they will use for the Ahly game, giving them in essence a 10-day build-up to that fixture where they will hope to match ex-Brazilians coach Pitso Mosimane’s Red Devils.

Mosimane ‘not worried’ about more disgraceful scenes with Sundowns fans

Al Ahly coach Pitso Mosimane says his only focus is on what happens on the field when his team meet Mamelodi Sundowns again in the Caf Champions ...
Sport
5 months ago

Getting a feeling for a stadium, Sundowns already know quite well from past matches that does not negate home-ground advantage for Ahly, but should make the Pretoria team feel more comfortable on match day, especially if they can get a good result against Al-Merrikh.

This will also be the first game in the pool phase for the Sudanese side after their opener with Ahly was postponed due to the latter’s involvement at the Fifa Club World Cup.

Sundowns have a fairly dire record on Egyptian soil, mostly against Ahly, with their only win in seven games, and in fact only time they scored, a 2-1 success over Zamalek in 2016. They have failed to find the back of the net in the other six matches.

Al-Merrikh’s only previous meeting with an SA club was the 2012 Confederation Cup when they edged Black Leopards 3-2 on aggregate.

AmaZulu get the SA interest in the competition underway on Friday night when they host Horoya of Guinea in Durban.

In those 10 matches, Horoya have won two and lost only once, the other seven ending in draws.

Pirates will also play at a neutral venue, of sorts, when they travel to Benghazi, Libya to take on Al-Ittihad in the Confederation Cup's Group B on Sunday.

Al-Ittihad are based in Tripoli, but their stadium has been damaged in their country's civil war and so they host their Caf matches in the eastern city of Benghazi.

These are venues Pirates know well. They played Al Ahly Benghazi there in the pool stages of the Confederation Cup last year and came away with a 0-0 draw.

Having won their group opener against Algerian side JS Saoura last weekend, Pirates may be hoping for a win this time round, but another draw will not be a bad result.

Al-Ittihad are playing their first game in the pool stages after their fixture against eSwatini side Royal Leopards last weekend was postponed to early March.

In a revelation that will add to the discourse about depression and mental health challenges faced by elite athletes, former Bafana Bafana and ...
Sport
5 months ago

Mamelodi Sundowns players will call on their vast continental experience during their back-to-back Caf Champions League group-stage matches against ...
Sport
5 months ago

Brian Onyango and Rushine de Reuck are doing the job in central defence and Mosa Lebusa knows he has his work cut out for him getting his place back ...
Sport
5 months ago