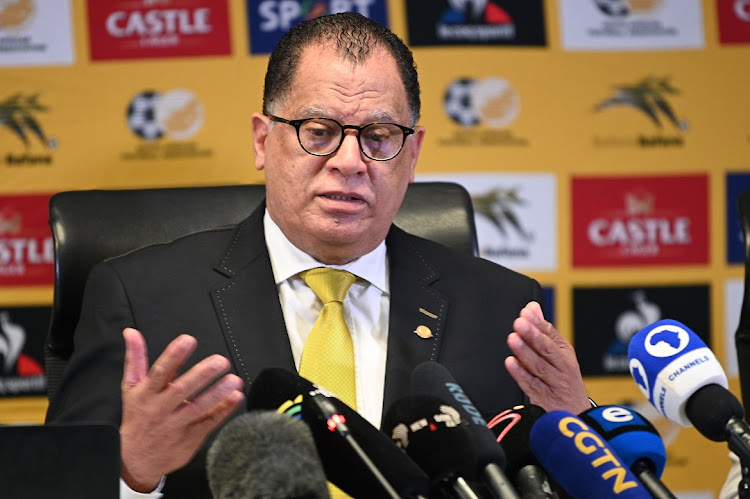 Former high-ranking SA Football Association (Safa) officials have alleged bullying and disregard for the Safa constitution in the organisation’s regions, aimed at keeping incumbent Danny Jordaan in power in this year's presidential election.

They say their lawyers are preparing a class-action lawsuit to combat the alleged bullying tactics. Five former Safa officials, who did not want to be named fearing victimisation and three of whom were sources for this article, are behind the class action.

Apart from the claims said to be addressed in the class-action suit, the three sources also allege that changes to the Safa constitution expected to be ratified at a March 26 congress — where the date of the elective congress will be decided — are aimed at entrenching national executive committee (NEC) members loyal to Jordaan in their positions.

Safa has dismissed the allegations as a “smear campaign”.

One of the former Safa officials said the alleged tactics were worse than allegations of impropriety made about a bitter 2018 Safa presidential election.

“It's much worse than anything that happened with [Andile] ‘Ace’ Ncobo [who ran against Jordaan in 2018],” the source said. “Right now literally I would term them nothing other than a mafia going around intimidating and bullying people to elect their people who are friendly to Danny.”

Safa on the Hawks investigation into Jordaan: 'We want to be treated like Jacob Zuma'

The SA Football Association (Safa) says it has not been contacted by the Hawks about any investigation into corruption and has vowed to deal with the ...
Sport
3 months ago

The sources also said another proposed change to the Safa constitution was to expand the NEC, going against a request from Fifa in 2013 to reduce its size. They alleged this was because positions on the executive were being offered as enticements in exchange for regional heads voting for Jordaan.

One source said the constitutional changes “come on top of them going around the regions bullying people into electing the people they want”.

“They are sending NEC members to go and lobby on behalf of Danny Jordaan, and we have been tracking them. They promise positions on the NEC as an enticement to vote for Danny. Anyone who is not supportive of Danny is being kicked out.”

The sources gave two examples of alleged bullying or disregard for the constitution in recent regional elections but said they had received many more complaints. Safa regions form the biggest part of the vote in the elective congress.

At the Thabo Mofutsanyana region's elective congress this month, “NEC member Monde Montshiwa was sent to strong-arm them to elect the current leadership [regional head and NEC member Elizabeth de Koker], an ally of theirs [Jordaan and his supporters]”, one source said.

This is what we spent Fifa’s R450m on, explains Safa CFO

Safa officially closes 2010 Fifa World Cup Legacy Trust. How it spent the cash has not always been without controversy
Sport
3 months ago

“Even though he had no standing in that meeting, he bullied them to the point where they had no option. Here's someone from the national executive threatening that they would be suspended if they did not accept that.

“There are six LFAs [local football associations] with four votes each. De Koker had two LFAs supporting her, she suspended one before the congress and had three against her. The executive votes swayed it.”

The other alleged example was an election for the Buffalo City region on January 16.

“On January 9 they have a meeting where all six LFAs attend and are in good standing,” one source said. “The next weekend at the congress, before the start the regional president [NEC member Mxolisi Sibam], who is one of Danny's closest allies, stands up and says three LFAs are non-compliant. They are not told why.

“You have three remaining; two vote for him [Sibam]. They are replicating that all around the country — declaring LFAs non-compliant or suspending opposition. They have no power to, but do it anyway because the constitution means nothing to them.”

TimesLIVE is in possession of a copy of the proposed altered constitution. It confirms a proposed change for the NEC to consist of 44 members, rather than the current 34.

Another amendment is that to serve on the NEC, a candidate would need to have served Safa at regional level or higher for 10 years. Another is that candidates need the backing of their region and one (provincial list) or two (national list) more to stand for the NEC.

The former Safa officials alleged the second of those changes was aimed at entrenching NEC members loyal to Jordaan, and at guaranteeing votes for the incumbent president from 18 NEC members who were also regional presidents. It also would explain NEC members’ willingness to bully or intimidate in the regions, they alleged.

They said the perks involved in being part of the NEC made this an attractive enticement.

One source did note, though, that one “positive” proposed change to the constitution was removing one vote per NEC member, leaving mostly only regions able to vote, as Fifa had also once requested.

The allegations from the former officials come after the Hawks last week confirmed an investigation into Jordaan regarding aspects of Safa’s acquisition of the Fun Valley resort as a technical centre, among other issues.

When TimesLIVE asked Safa to comment on the allegations this week, the organisation responded with a brief, tersely worded statement.

“The story is based on three 'former high-ranking Safa officials'. They are not members of Safa and cannot be high-ranking. They are outsiders,” the statement read.

“Safa has no obligation to respond. Members, however, have constitutional rights to raise or challenge any matter. Non-members do not have these rights so they embark on media smear campaigns.”

"He’ll be removing teams that perform badly every other week, mos," joked one user.
Sport
3 months ago

The SA Football Association (Safa) have submitted a letter of intent to the Confederation of African Football (Caf) to host both the Caf Champions ...
Sport
3 months ago

Prominent SA football supporter Joy "Mama Joy " Chauke is over the moon after she was invited to join global soccer fans at the Qatar 2022 Fifa World ...
Sport
3 months ago

Football fans gathered in large numbers outside Orlando Stadium on Saturday morning for a “peaceful protest” to put pressure on the Premier Soccer ...
Sport
3 months ago