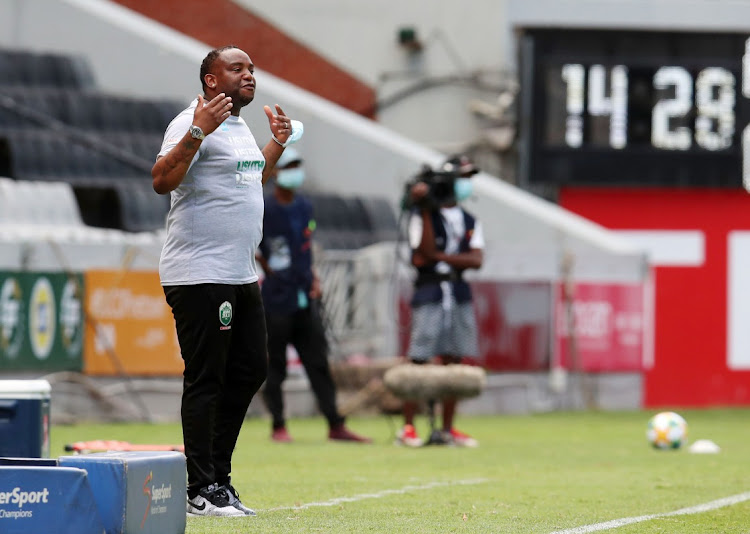 A lot was expected from the KwaZulu-Natal-based club after their surprise run in the previous campaign where they finished second in the DStv Premiership and qualified for the Caf Champions League for the first time in their history.

But McCarthy’s men's Champions League fairytale is set to end in the group stages despite still having a game to play.

This after Usuthu lost 2-0 to Raja Casablanca at Moses Mabhida Stadium in Durban on Friday night and they didn’t get a favourable result in the other match of the group between ES Setif and Horoya.

Setif bounced back twice to beat Horoya 3-2 to virtually eliminate McCarthy’s charges from the quarterfinals race.

Usuthu have also had a tough DStv Premiership campaign this season as they have yet to win a league match in 2022.

“We definitely didn’t have the best of seasons. From the preseason, it just didn't go the way we wanted it to start, especially in the recruitment department and the players that we wanted to bring in, it didn’t happen,” said McCarthy.

AmaZulu FC’s Caf Champions League fairytale looks set to end in the group stages unless the SA side get a favourable result from the ES Setif and ...
Sport
4 months ago

“Of course, you are kind of hoping that the same team that finished second in the league last season will still have the desire even though there weren't players coming in and challenging them for places in the team.”

In the Champions League, Usuthu are three points behind second-placed Setif with one game to go. Even if the SA team beat Horoya and Setif lose their last match to Raja, Setif will still go through.

McCarthy admits that they found it difficult to compete in both the Caf and domestic league with the team that he had at his disposal at the beginning of the season.

“When you start like that, you know it’s not going to be a very easy season, so for me it’s been mediocre from what we thought we could build on the season we had just finished and the position that we got,” he said.

“And this loss (Raja) just ended massive pressure ... and in the league form we are just inside the top eight (Usuthu is in position nine) and psychologically it might just be one hurdle too many that we may not have the fight.

“I’m hoping that they (players) are mature enough, good professionals, they love the job that they do and they must be privileged that they are part of this team and that they fight in every single match until the end of the season to turn things around.”

With their Champions League dream over, McCarthy now will chase a top four finish that the 44-year-old mentor believes is still possible.

AmaZulu are six points behind the fourth-placed Orlando Pirates, Who are on 35 points.

“With seven games to go, you can still achieve something special, a top four finish can still be possible but it all comes to the desire and the mentality of the players.,” McCarthy said.

“This is a time where we are going to be tested because of not having the best season that everybody expected after we finished second.

“We are good enough to compete and win all seven games, but me saying and them doing it are two completely different things.”

AmaZulu will return to league action against Baroka FC away from home on Wednesday, April 6.

Chiefs take on Arrows in good spirits after arbitration victory

After their arbitration win against the Premier Soccer League (PSL), Kaizer Chiefs go in search of another victory against Golden Arrows on the field ...
Sport
4 months ago

Kaizer Chiefs win arbitration against PSL and matches must be played

Kaizer Chiefs’ arbitration against the Premier Soccer League (PSL) has gone the club’s way, with the two matches the club failed to honour in ...
Sport
4 months ago

'We are going to fight until the end,' says Chiefs midfielder Baccus

Kaizer Chiefs will be keen to extend their recently found good run and try to push Mamelodi Sundowns all the way for the DStv Premiership title when ...
Sport
4 months ago