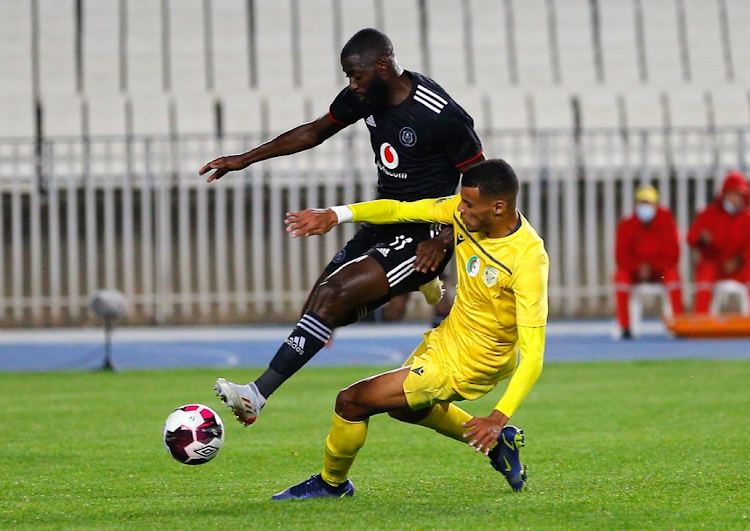 Orlando Pirates' Deon Hotto gets past a challenge in the Caf Confederation Cup match against JS Saoura at Stade du 5 Juillet 1962 in Algiers, Algeria on March 20 2022.
Image: Jafaar Ladjal/BackpagePix

Orlando Pirates will not field a weakened team against Al-Ittihad when the Buccaneers host the Libyans in their last Caf Confederation Cup group stage match at Orlando Stadium.

The 2015 losing finalists are top of Group B on 12 points after a clinical 2-0 win over Algerian side JS Saoura in Algiers on Sunday secured them a place in the quarterfinals with a game to spare.

Pirates co-coach Mandla Ncikazi said Al-Ittihad, who are second on 10 points and will need a point to join Bucs in the quarterfinals, can expect a full-strength Bucs when the  teams meet on April 3.

“We’re a professional outfit and we try to win all our matches especially at home,” Ncikazi said.

“I’m happy we qualified for the quarterfinals but we are not going to change anything. We’re going to put out our best team and play to win and possibly get to 15 points.

“It’s not going to be an easy match but we’re going to play our best team.”

Pirates will host Al-Ittihad immediately after the Fifa international break and will hope to win to build momentum ahead of their DStv Premiership clash against Sekhukhune United at Ellis Park on April 6.

Al-Ittihad came from behind three times to win 3-2 against Leopards in Tripoli to move to second spot.

Ncikazi was impressed with Saoura’s organisation and individual players. The Algerians will now need to win their last game against Leopards and hope Ittihad lose away to Pirates to be part of the knockout stages.

“Saoura is a very difficult and good team and I think they will still qualify,” Ncikazi said.

Among clubs Pirates can expect to be drawn against in the quarters are Al-Ittihad, Al Ahli Tripoli, Egyptian clubs Pyramids and Al Masry, and Congolese clubs AS Otohô and TP Mazembe and Saoura.

The battle to lead SA football supporters is heating up between two feuding organisations, the National Football Supporters Association (Nafsa) and ...
Sport
3 months ago

Former England captain David Beckham handed over his Instagram account on Sunday to a doctor helping women give birth in the eastern Ukrainian city ...
Sport
3 months ago

Baxter disappointed Kaizer Chiefs were not inspired by arbitration outcome

Kaizer Chiefs coach Stuart Baxter was disappointed by the performances of some of his senior players after Amakhosi gave a below-par performance in ...
Sport
3 months ago

Kaizer Chiefs win arbitration against PSL and matches must be played

Kaizer Chiefs’ arbitration against the Premier Soccer League (PSL) has gone the club’s way, with the two matches the club failed to honour in ...
Sport
3 months ago

Liverpool midfielder Naby Keita has pulled out of the Guinea squad for their international friendlies against SA and Zambia due to a knee injury, the ...
Sport
3 months ago