Dolly and Alexander goals give Chiefs victory over Chippa in Gqeberha 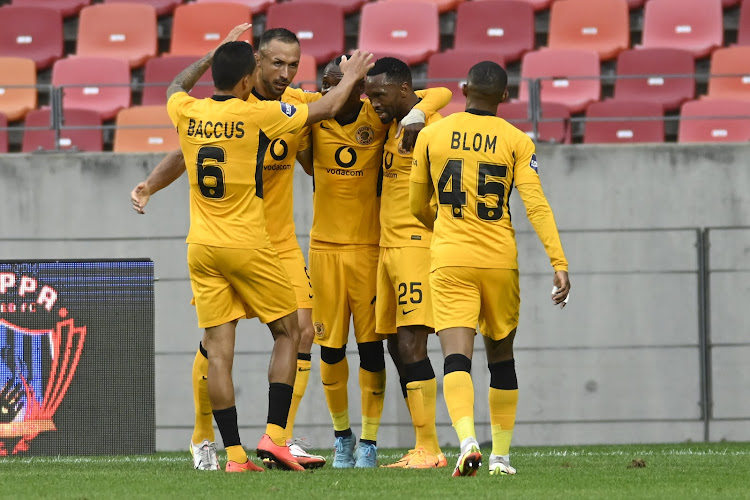 Kaizer Chiefs players celebrate one of their goals during a DStv Premiership match against Chippa United at the Nelson Mandela Bay Stadium in Gqeberha on Saturday.
Image: Deryck Foster/BackpagePix

Keagan Dolly and Cole Alexander came off the bench to give Kaizer Chiefs a moral-boosting 3-1 win over relegation fighters Chippa United at the Nelson Mandela Bay Stadium in Gqeberha on Saturday to remain third on the DStv Premiership log.

Dolly curled in a lovely free-kick just outside the area in the 75th minute before Cole wrapped up Staurt Baxter's team victory with a tap in three minutes from time.

Chippa, who remain winless at home this season, looked on course to deny Amakhosi full spoils when Cameroonian striker scored his 10th goal of the season a minute after the restart to cancel Samir Nurkovic's 23rd minute opening strike.

Chiefs were always in control of this encounter with Nurkovic missing as many clear-cut goal scoring opportunities before linking up with man-of-the-match Khama Billiat to score his first goal of the season.

The Serbian striker who announced himself with 12 league goals for Chiefs in his first Premiership season in 2019-2020, has been struggling with injuries and form and will be relieved to have opened his account.

Victory will give Chiefs some hope of at least finishing second in the Premiership as they remain just two points behind Royal AM who continued with their great form with a 4-1 away win over strugglers TS Galaxy.

Baxter's charges have two games in hand over Royal and log leaders Mamelodi Sundowns whose lead was cut to 11 points by Royal 's victory.

After a shock 1-0 defeat at home to Lamontville Golden Arrows last month Baxter will they maintain their form if they're to finish second and book a spot in next year's Caf Champions League - a competition Amakhosi came close to winning after being defeated in the final by Egyptian giants Al Ahly last season.

Dolly and Alexander goals made all the difference for Chiefs in a match that could have gone either way as Chippa did create good chances in both halves.

Chiefs first goal should be credited to their goalkeeper Brandon Petersen who provided a pin-point pass to Bernard Parker to feed Billiat whose first touch square pass was driven in by Nurkovic from inside the area.

Chippa, who remain 14th of the log with 21 points after 23 games, will be hoping  for a better result and their fifth away victory this season when they visit SuperSport United on Tuesday, while Chiefs could move to second spot on the table with a victory at home against Galaxy on Tuesday.

Kaizer Chiefs utility player Reeve Frosler admits things haven’t  gone according to the plan for him this season, but hopes to make amends in the ...
Sport
4 months ago