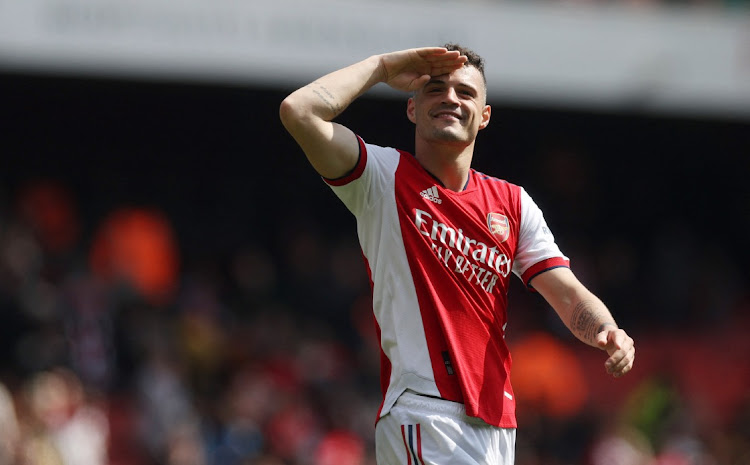 Swiss midfielder Xhaka has had a tricky relationship with supporters over the years, particularly after reacting angrily to being booed when substituted off against Crystal Palace in October 2019 and being stripped of the captaincy by former Arsenal boss Unai Emery.

Xhaka wrote in The Players' Tribune earlier this month that he was done with the club at the time and on his way out before a change of heart.

Arteta said on Saturday he was delighted by how fans had reacted to the 29-year-old's first league goal since 2020.

"I was dreaming of that because he deserves it. If any fan would individually spend five or 10 minutes with Granit... they would understand the person that he is, the professional he is and how much he cares about the club," Arteta told reporters.

"But the history was there. He made... a risky move, when he opened up and expressed his feelings, but as well he's done that because he's prepared.

"He feels that environment is going to protect him, he feels loved at the club, and the response I think was great.

"Thank you to the fans for showing that appreciation to him because I know how much that means to him."

Arsenal's win followed a 4-2 victory over Chelsea, leaving Arteta's fourth-placed side in a strong position to seal a top-four spot for the first time since 2015-16.

The Gunners are locked in a tight battle with north London rivals Tottenham Hotspur to seal a Champions League spot. The two sides meet on May 12.

"My belief is that we are going to give it a real go, we can win matches but the margins are going to be really small and we have to be very aware of that," Arteta said.

GladAfrica Championship side Cape Town Spurs have made an impassioned plea to sports minister Nathi Mthethwa to assist in professionalising match ...
Sport
3 months ago

Mamelodi Sundowns need a point to clinch the DStv Premiership mathematically after Royal AM drew 0-0 against AmaZulu at Chatsworth Stadium on Sunday, ...
Sport
3 months ago