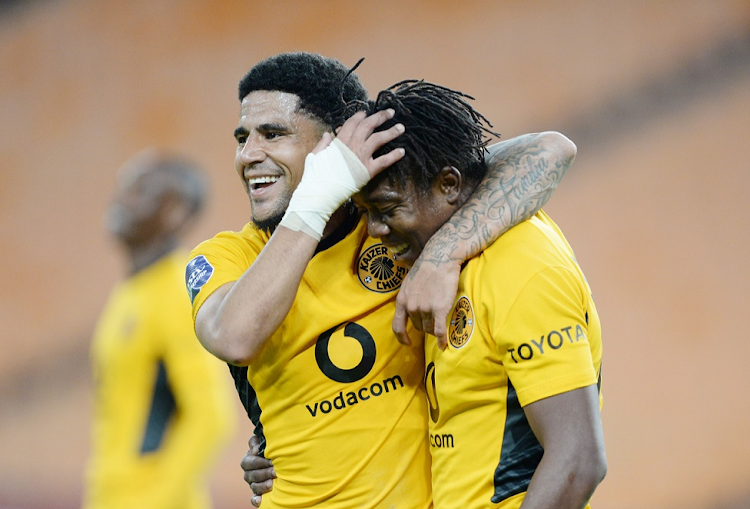 Keagan Dolly of Kaizer Chiefs celebrates his goal with teammate Kgaogelo Sekgota in the DStv Premiership match against Marumo Gallants at FNB Stadium on May 3 2022.
Image: Lefty Shivambu/Gallo Images

There were about 700 supporters at FNB Stadium on Tuesday evening who might feel they didn’t get a performance and atmosphere worth their while and money even though Kaizer Chiefs finally won a match in the DStv Premiership after four successive defeats.

After a barren first half with little in attacking movements and goalmouth action from the home side, Keagan Dolly's strike from range made the difference, scoring the 77th-minute winner.

There were about 50 Amakhosi supporters directly behind the home bench who tried to cheer their team on, but the attendance was still poor to a point where players could be heard shouting from the pitch, though that changed to some extent after Sekgota’s goal.

There was absolutely no-one seen cheering for Gallants or wearing the colours of the Limpopo team, who though did win some applause from Chiefs fans in the stadium who appreciated their short-passing game when the score was still 0-0.

The narrow win ensured Chiefs will probably at least avoid any blushes of recording one of their lowest points tallies in a Premiership season.

Chiefs’ lowest total was 42 in the 2006-07 season, the majority of which was played under Ernst Middendorp, where the German took charge of the first 23 games before he was fired.

Their second-worst Premiership campaign came in the in 2007-08 season when Chiefs managed 43 points and finished sixth.

The struggling Soweto giants moved a position up to fourth place on 42 points from 27 matches, and they trail third-placed Cape Town City by two points and are three behind second-placed Royal AM, who have both played a game less.

Qualification for the Caf Champions League, which comes with finishing either as champions or runners-up, is a priority for Chiefs.

Finishing third, which comes with Caf Confederation Cup qualification, will be consolation prize but to achieve that Chiefs can’t afford to put a foot wrong in their final three games this season — against champions Mamelodi Sundowns, Sekhukhune United and Swallows.

Chiefs’ struggles this season, and in the past seven barren years, are in stark contrast to the glory days of their last Premiership title win in May 2015 when Stuart Baxter took Chiefs to 69 points.

For Gallants, the defeat does not spell doom and gloom for Dan Malesela’s side. Though they are 11th on 31 points from 27 matches, they will need at least two wins from their last three remaining games against Golden Arrows, TS Galaxy and Sekhukhune United to stand a chance of finishing inside the top eight.

Kaizer Chiefs have revealed that attacker Dumisani Zuma has been suspended by the club for the second time in six months pending a disciplinary ...
Sport
2 weeks ago

In one of the most brutally honest interviews wirth an SA coach in recent times, Arthur Zwane has given a harrowing description of the deep-rooted ...
Sport
2 weeks ago

Premier Soccer League prosecutor Zola Majavu has provided an update on the disciplinary hearing the league has brought against Cape Town City boss ...
Sport
2 weeks ago