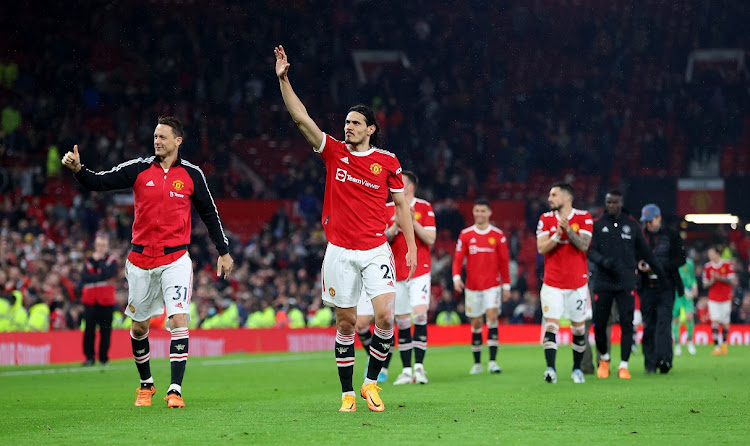 Edinson Cavani of Manchester United interacts with the crowd after the final whistle of the Premier League match agasinst Brentford at Old Trafford on May 2 2022.
Image: Catherine Ivill/Getty Images

Manchester United interim manager Ralf Rangnick said he has yet to speak to his successor Erik Ten Hag about plans for next season but believes Monday’s performance in the 3-0 Premier League win over Brentford was a sign of their future potential.

Goals from captain Bruno Fernandes, Cristiano Ronaldo and Raphael Varane sealed a comfortable victory in the final home match of a difficult campaign.

“I'm not happy with the results, especially in the last four or five weeks. In general, we have lacked consistency,” Rangnick, who will act as a consultant for the club from next season, told SkySports.

Regarding his handover to Ten Hag, he added: “So far we haven't been able to speak. Erik's focus is on winning the Dutch league [with Ajax Amsterdam], our focus was on our games.

“It's obvious quite a few players will leave and there is a need for top quality players. I strongly believe that if everyone works together, we can bring Man United back to where we need to be.

“Other clubs only needed two or three transfer windows to challenge but from now on we need to bring in top-quality players who really help raise the level. If this happens then I don't think it should take too long.”

Rangnick believes the win over Brentford was a vast improvement when compared to their recent form.

“We were in control for most parts,” he said. “In possession, that was one of our best performances this year. It was the type of performance we wanted to show to our supporters.

“We played with Juan Mata and Nemanja Matic, and that gave us some quality in midfield. It was not too easy for Brentford to take the ball away from us.”

In the first half we played too many square and back passes but in general it was a good performance.”

Manchester City manager Pep Guardiola said playmaker Kevin De Bruyne was the best player in his position and the Belgium international was an ...
Sport
3 weeks ago

Liverpool manager Juergen Klopp hailed Sadio Mane's versatility after the Senegal forward scored to help his side secure a 2-0 win over Villarreal in ...
Sport
3 weeks ago

Liverpool breeze past Villarreal to close in on Champions League final

An own goal and a Sadio Mane strike earned Liverpool a 2-0 victory in their Champions League semifinal first leg against Villarreal on Wednesday, ...
Sport
3 weeks ago