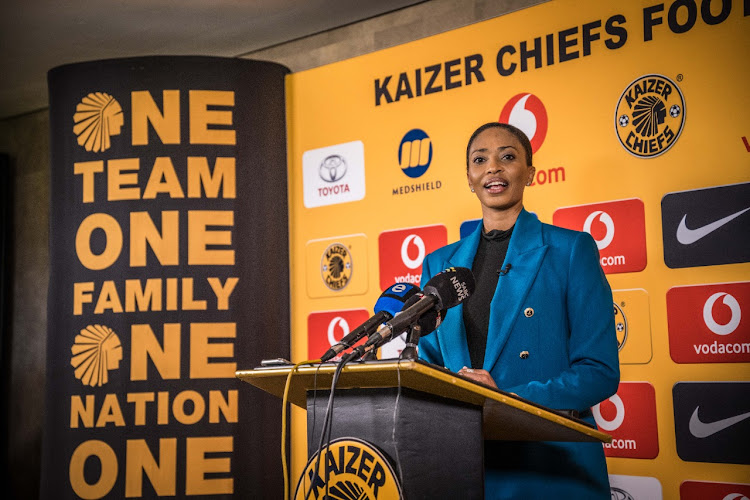 Kaizer Chiefs’ marketing and commercial director Jessica Motaung says they are working tirelessly behind the scenes to start a women’s programme.

Motaung reiterated their commitment to women’s football on Wednesday, confirming she has been appointed to the Confederation of African Football’s (Caf) organising committee for the women football standing committee.

“I see us [Chiefs] as a sporting institution that should be doing sport across the board and one of the things is women’s football,” she said.

“We have been working tirelessly behind the scenes and we want to do it properly. It is not something that we don’t want to do quickly, there is an important investment that needs to go into it and we are looking into that.

“We need to look into the type of players, the type of culture that we want to build. Our technical guys have been working behind the scenes and there has been a lot of research done around the SA landscape to understand women's’ football.

“We will certainly be making an announcement to our supporters because this is an exciting space, but it has to be packaged properly.”

The full scope of her new role at Caf has not been fully outlined, but one of the key events that Motaung will be working on immediately is the 2022 Africa Women Cup of Nations in Morocco from July 2 to 23.

“Women’s football is growing internationally, but we have seen the commitment by Fifa and Caf to make sure that they have set up strategic committees that are not just looking at the development of the game, but also the commercialisation of the game.

“We have a Women’s World Cup coming in Australia and New Zealand next year and Fifa has already announced that the tournament will have its own stand-alone sponsors.

“So, it is very exciting times in the women’s game and for me it is an honour to be called after having served on the task team in 2019 to put together this strategy.

“To be part of the committee that is going to ensure that the vision that is realised and put into place is exciting.”

Motaung's Caf duties are going to require more travelling on the continent and internationally, but she said she has a team at Naturena that will hold the fort in her absence in the marketing department.

“I have a great team at Kaizer Chiefs who are doing a wonderful job. I will balance it out to make sure that all my responsibilities are taken care of.

“There will be a lot of travelling and lots of work on the continent and internationally. We will add to the team to make sure that they can deliver on all the objectives for the club.”

There were about 700 supporters at FNB Stadium on Tuesday evening who might feel they didn’t get a performance and atmosphere worth their while and ...
Sport
2 weeks ago

Chiefs coach Zwane on players with off-field problems: ‘Discipline is everything’

Premier Soccer League prosecutor Zola Majavu has provided an update on the disciplinary hearing the league has brought against Cape Town City boss ...
Sport
3 weeks ago

Kaizer Chiefs have revealed that attacker Dumisani Zuma has been suspended by the club for the second time in six months pending a disciplinary ...
Sport
2 weeks ago