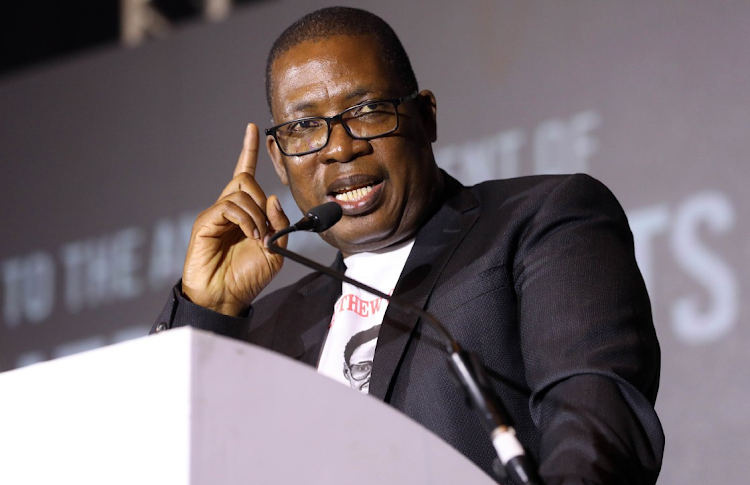 Swallows FC lifetime president and Gauteng MEC for education Panyaza Lesufi has hit back at former coach Brendan Truter who accused Dube Birds supporters of threatening his family and the club of not paying him his settlement fee.

Lesufi said Swallows’ focus is on their bigger relegation battle.

The unhappy Truter, who is now on the books of AmaZulu, was speaking after Usuthu defeated Swallows 1-0 in their DStv Premiership match at Dobsonville Stadium on Tuesday night.

“Of course, the way I left Swallows wasn’t too nice. What the public knows is what happened on my exit from the club — my family was threatened, supporters came to my house, supporters came to training,” said Truter as he fired a salvo after the match.

“They basically forced me out the door, wanting me to resign but of course to resign means there’s no settlement, no payout or anything like that.

“I had to stand brave and protect my family at that moment. Of course, there was a buyout clause in my contract that Swallows also held at that moment, so I couldn’t leave out of my free will and, basically, I was threatened.

AmaZulu interim coach Brandon Truter has described his return to Dobsonville to face low-flying Swallows FC in a DStv Premiership encounter on ...
Sport
1 week ago

“I mean supporters stopped the bus at one stage, security didn’t protect me and I have videos, SMSes and messages to prove this. So I’m not lying or making up stories, it’s there for everybody to see.”

Lesufi responded that Swallows had given Truter his first opportunity in top-flight football.

“I am not going to honour those accusations with a response. He now has a name in local football because of which club? It is because of Swallows FC,” the club boss said.

“I won’t stoop so low because as a club we are focused on one thing, and that is the battle to survive relegation. Getting into exchanges and debates is not a luxury we can afford right now.

Lesufi added: “I was at the game against AmaZulu and we were so unfortunate. The guys missed so many sitters, but that happens when you are at the bottom — luck will desert you. But we are confident and not panicking at all, even though we are a little concerned about this relegation dogfight.”

Truter had also alleged in his post-match statements that Swallows have not honoured financial commitments to him.

‘A lot of people don’t want to see me in this job’, says AmaZulu coach Truter

AmaZulu FC interim coach Brandon Truter says there are a lot of people who don’t want to see him in charge of the DStv Premiership side despite ...
Sport
2 weeks ago

“It’s just negotiations on the settlement — there was a clause that I couldn’t speak to the media about these things but they’ve bridged that agreement by not paying the settlement, but they haven’t paid me as well,” he said.

“So they’ve bridged that again. I’m going to PSL to get my money. So now we can talk freely about these things, so this result means a lot to me.

“I really do not want to sum up the game. For me it’s about the result. It means a lot to me and I want to thank the boys for putting in a shift and getting the result — it means the world to me,” added Truter.

AmaZulu have found form under Truter and have inched up to seventh place ahead of their meeting against Sekhukhune United at Moses Mabhida Stadium on Saturday (5pm).

Dylan Kerr’s Swallows are in a desperate second-last place with three games to go as they face SuperSport United at Lucas Moripe Stadium on Friday night (7.30pm).

With a particularly underwhelming the season coming to an end, Kaizer Chiefs are applying their minds to the coaching situation at the club, ...
Sport
1 week ago

Sekhukhune United co-coach Owen Da Gama says he was laughed at when he said Peter Shalulile, then his player at Highlands Park and now Mamelodi ...
Sport
1 week ago

Royal Bafokeng Stadium management have given assurance the pitch will be in pristine condition for the Nedbank Cup final between Mamelodi Sundowns ...
Sport
1 week ago