Chippa and Baroka play to lively draw in Gqeberha 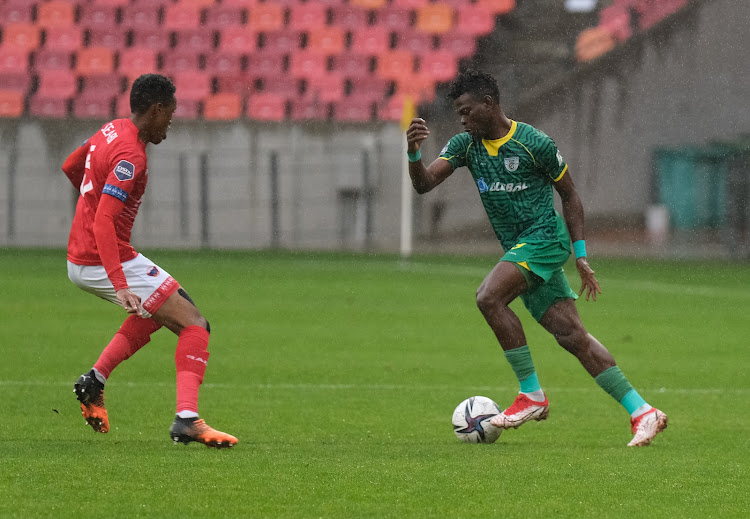 Richard Mbulu of Baroka controls the ball under pressure from Sammy Seabi of Chippa United during their DStv Premiership match at the Nelson Mandela Bay Stadium.
Image: Michael Sheehan/Gallo Images

Both teams will rue the fact that they didn’t win this match as Chippa are not yet safe from being dragged into the promotion and relegation play-offs during their remaining two matches.

Baroka, who are rooted at the foot of the standings, remain in serious danger of automatic relegation as they are two points adrift of second-from-the-bottom Swallows.

In their remaining matches, Chippa will be looking to ensure safety against Swallows and TS Galaxy while Baroka will have to beat SuperSport United and Maritzburg United to have any chance of surviving.

The opening goal came after 67 minutes when Namibian midfielder Riaan Hanamub unleashed a thunderous left-footed shot that landed on the roof of the net after he was set up by Siphesihle Mkhize.

Chippa United’s lead did not last long as Baroka, who remain winless away this season, pulled one back through a stunning solo effort by substitute attacker Dan Ndhlovu.

After 14 matches away from home, Baroka have lost a whopping 11 and managed only three draws.

Ndhlovu got the much needed equaliser with a close range toe poke that slipped past goalkeeper Loydt Kazapua after he dribbled past Veluyeke Zulu after 75 minutes.

Baroka, who looked like they were going to lose this match a few minutes later, took the lead in the 83rd minute through another substitute Decide Chauke who blasted a left-footed shot that gave Kazapua no chance.

Chippa ensured this crucial home point deep during injury time from the effort of Thokozani Sekotlong who was allowed space to pick a spot and execute in a dangerous area.

In the other fixture played on Saturday afternoon, Marumo Gallants and Golden Arrows played to a goalless draw at the New Peter Mokaba Stadium in Polokwane.

Despite the risk she may be disqualified from the race to challenge incumbent Danny Jordaan for the SA Football Association (Safa) presidential ...
Sport
2 weeks ago

Swallows earned a priceless away point during their drama-filled 2-2 DStv Premiership encounter with SuperSport United at Lucas Moripe Stadium on ...
Sport
2 weeks ago