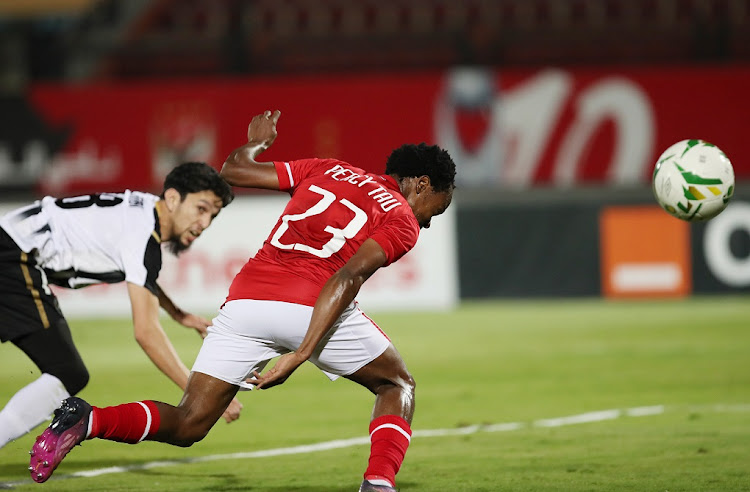 Percy Tau of Al Ahly scores from a header during the Caf Champions League semifinal first leg match against ES Setif at the Salam Stadium in Cairo, Egypt on May 7 2022.
Image: Gavin Barker/BackpagePix

For Pitso Mosimane, the 4-0 home win against ES Setif in the first leg of Al Ahly's Caf Champions League semifinal would have been sweeter as it came amid another bout of fierce criticism against him, and because Percy Tau broke his scoring duck with a masterclass.

Tau, who had hit a dry run coming back from a series of injuries, was on fire at Al Salam Stadium and the obvious man-of-the-match on Saturday night scoring a brace against the Algerian outfit and providing an assist for Mohamed Sherif’s third goal.

Some Egyptian media and Ahly legends have questioned Mosimane’s signing of Bafana Bafana attacker and his ex-Mamelodi Sundowns star Tau from Premier League Brighton & Hove Albion at the start of the 2021-22 season.

Some had also been vociferously on Mosimane’s back as Ahly suffered a defeat and two draws in the Egyptian Premier League, and even the coach’s conservative tactics negotiating past Raja Casablanca in the Champions League quarterfinals came in for stick.

On Tau coming back so strongly for the big occasion Mosimane said, via Kingfut.com: “We need to be patient. After his goal drought, he scored in an important game in the semifinal of the Caf Champions League.

“I know that we have a problem in finishing our chances but we need to be calm about it and I am happy that we managed to score four goals.

“ES Setif are a strong team and they had chances to score, but the sending off certainly helped us and we capitalised on it but this is football.”

Setif had Amir Karaoui sent off in the 35th minute.

Ahly had also lost back-to-back against Mamelodi Sundowns in the Champions League group stage. Wael Gomaa, Ahmed Koshary and Taha Ismail were among former Ahly stars to heavily criticise Mosimane and his tactics in recent weeks.

Mosimane said Ahly had been playing solid football during that time but struggling to convert chances.

🎶 Percy Tau, man of the match

“When you create a lot of chances, you know you’re on the right track, even if you’re not scoring enough goals,” he told beIN Sports.

“Percy Tau and Mohamed Sherif scored because they are forwards, but Taher Mohamed’s goal is the most important for me because I played him as a striker and had he not scored I would get blamed for making such a decision.

“We still haven’t qualified to the final yet despite the flattering scoreline, and it won’t be easy to play against ES Setif in the return leg.

“Before the red card, we were playing well and controlled the game, but what would happen if we had won by just one goal with a man advantage? I would’ve been criticised by the media.

“I have enough experience because I’ve been a coach for 21 years and have gone through a lot of difficult situations in the past.

“My team creates a lot of chances, but if we struggled to do that, then it becomes a concern for me.”

Ahly’s second leg against Setif is in Algiers on Saturday night.

Sharpshooter Shalulile on the cusp of PSL history

Premier Soccer League's reigning footballer of the season Peter Shalulile stands a good chance to become a second player after Collins Mbesuma of ...
Sport
1 month ago

After losing to Downs twice in the group stages, Al Ahly’s Mosimane warned that those results could be ‘deceptive’
Sport
3 weeks ago