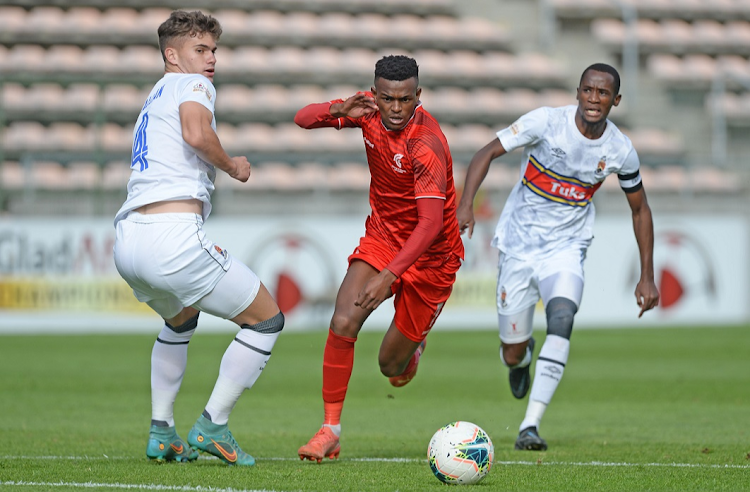 Eyona Ndondo of Cape Town Spurs goes past Keegan Allan of University of Pretoria to open the scoring in the GladAfrica Championship game at Athlone Stadium in Cape Town on May 8 2022.
Image: Ryan Wilkisky/BackpagePix

Richards Bay FC will have an advantage going on the final day of the GladAfrica Championship in their mission to take the title and earn automatic promotion to the DStv Premiership.

This after the KwaZulu-Natal team beat TS Sporting 2-1 at KwaBokweni Stadium in Mbombela on Sunday in a thrilling penultimate round to SA’s second-tier, taking Richards Bay to 53 points.

Pretoria University, who came into the second-last round level on 50 points with Richards Bay, were held to 2-2 draw by Cape Town Spurs at Athlone Stadium so went to 51 points.

That means Richards Bay go into their home fixture against battling Spurs at King Zwelithini Stadium in the coming Sunday’s final round with a two-point advantage over Tuks.

Richards Bay, who have a +17 goal difference, could secure the championship and promotion with a point, so long as Tuks (+14 difference) do not beat Spurs by four goals.

While Richards Bay hold a two-point advantage, anything can still happen on the final day and a win to Spurs will leave the door open again for Tuks as the GladAfrica goes down to the wire.

Second-last-placed Sporting's loss against Richards Bay saw them relegated to the third-tier ABC Motsepe League along with bottom-placed Jomo Cosmos, who officially made the drop last week, though some protests that are apparently in the works may still have a bearing on the relegation situation.

Jomo Cosmos may be relegated from the GladAfrica Championship according to the log standings, but there are various protest cases that just might ...
Sport
2 weeks ago

Appearing in a very good spirits despite just being relegated from professional football, Jomo Sono has said he won’t buy a Premier Soccer League ...
Sport
2 weeks ago

University of Pretoria (Tuks) remain on course for automatic promotion to the PSL after they came from behind to force a 1-1 draw with JDR Stars ...
Sport
3 weeks ago