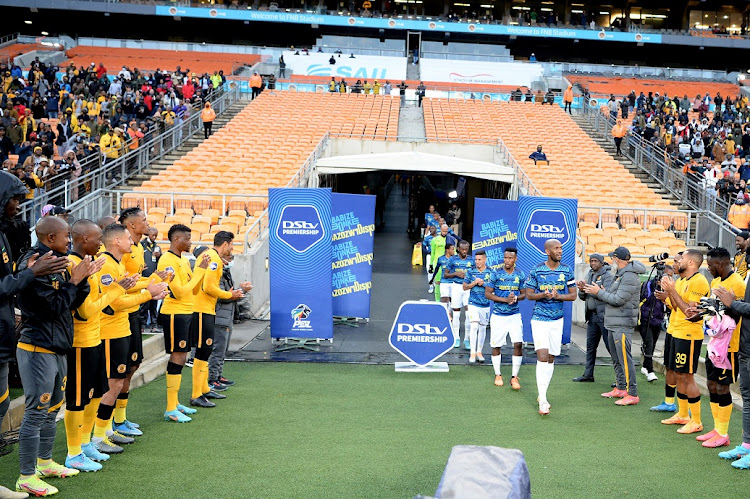 Kaizer Chiefs gave a guard of honour to Mamelodi Sundowns ahead of the DStv Premiership match in Johannesburg on May 8 2022.
Image: Lefty Shivambu/Gallo Images

The match took place at the FNB Stadium in Johannesburg on Sunday, and both teams had supporters present to watch the game.

The match started on a high note when Amakhosi gave Sundowns a guard of honour after they clinched their fifth successive title on April 27 with a 0-0 draw against Cape Town City at Loftus Versfeld.

Amakhosi fans lamented Keagan Dolly’s missed penalty, saying the club could have emerged victorious over their rivals. The match ended in a 1-1 draw.

Others said they were satisfied with the outcome of the match.

Sundowns put Amakhosi under pressure in the first half when Aubrey Modiba scored a goal 49 minutes into the match, prompting Amakhosi's Phathutshedzo Nange to relieve pressure on his teammates with the equalising goal in 76 minutes.

Some Kaizer Chiefs' players commended interim coach Arthur Zwane's contribution to what they described as a great match, while others called on the football club to appoint him as coach following the departure of Stuart Baxter.

Sundowns leads the DStv Premiership log with 62 points followed by Cape Town City, Royal AM and Kaizer Chiefs in fourth position with 43 points.

We could've and should've won this game man, GIVE ARTHUR ZWANE HIS CONTRACT!!✌🏿💛 https://t.co/iy1g5UMJTx

Tough luck but we could've won the game. We take only positivity out of this game https://t.co/42YjAtJOxw

Yes I know the game between Kaizer Chiefs FC and Mamelodi Sundowns FC is entertaining but nothing will come CLOSE to this guard of honour moment... 😁 🤭 #DStvPrem #Downside

RT to annoy them on your timeline... 💛 👆 😄 pic.twitter.com/LJLcqzdawM

We could've and should've won this game man, GIVE ARTHUR ZWANE HIS CONTRACT!!✌🏿💛 https://t.co/iy1g5UMJTx

We are Mamelodi Sundowns FC.The best and most successful not forgetting hated team in the @OfficialPSL era!! 💛 👆 pic.twitter.com/OK4YII2y4P

WATCH | Bobsteak and Kaizer Chiefs give Sundowns guard of honour

Kaizer Chiefs gave a guard of honour to DStv Premiership champions Mamelodi Sundowns ahead of their match at FNB Stadium on Sunday.
Sport
2 weeks ago

It was billed as the “takeover” of FNB Stadium by champions Mamelodi Sundowns and while the attendance was disappointing amid wet and cold weather, ...
Sport
2 weeks ago