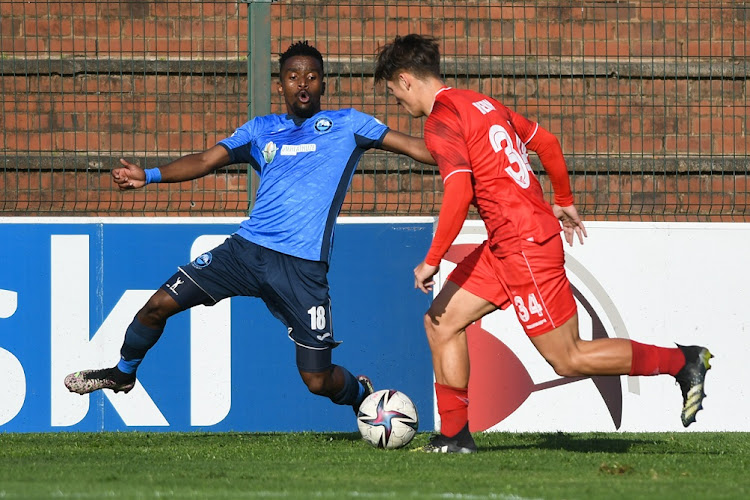 Siphosethu Meveni of Richards Bay and Liam Bern of Cape Town Spurs during the GladAfrica Championship match at King Zwelithini Stadium in Durban on May 15 2022.
Image: Darren Stewart/Gallo Images

Richards Bay FC ensured their promotion to the DStv Premiership from the GladAfrica Championship on Sunday even though they were held to a 0-0 draw by Cape Town Spurs at home at King Zwelithini Stadium.

The KwaZulu-Natal club ensured there will be five teams from the province in the top-flight next campaign, so long as Maritzburg United do not find themselves relegated from the Premiership, which mathematically is unlikely.

Royal AM, AmaZulu and Lamontville Golden Arrows are the other three KwaZulu-Natal sides who will compete in the Premiership in 2022-23.

Richards Bay, who came into the game on 53 points, needed a draw or a win to ensure they won the championship regardless of what happened between second-placed University of Pretoria FC and Hungry Lions at Tuks Stadium.

Tukkies also drew 0-0 to preserve the runners-up spot. If Tuks, who went into the final round on 51 points, had won and Richards Bay lost the Pretoria team would have been promoted.

The GladAfrica (First Division, or NFD) really did go down to the wire as in the final seconds of both the deciding games the title remained undecided and a goal in either could swing it one way or the other.

Last-placed Jomo Cosmos and second-last TS Sporting had already been mathematically relegated from the GladAfrica to the third-tier ABC Motsepe League ahead of the final round.

Richards Bay FC will have the advantage on the final day of the GladAfrica Championship to take the title and earn automatic promotion to the DStv ...
Sport
1 month ago

Relegated GladAfrica Championship side Jomo Cosmos have announced that their player Sivuyile Zozi has died.
Sport
1 month ago

A protégé of Sono, Arthur Zwane suggests it might be time for the Black Prince to hand over the reins at the club
Sport
1 month ago

Jomo Cosmos may be relegated from the GladAfrica Championship according to the log standings, but there are various protest cases that just might ...
Sport
1 month ago