‘A magnificent day for us’ — Barker savours Stellies’ win against Sundowns 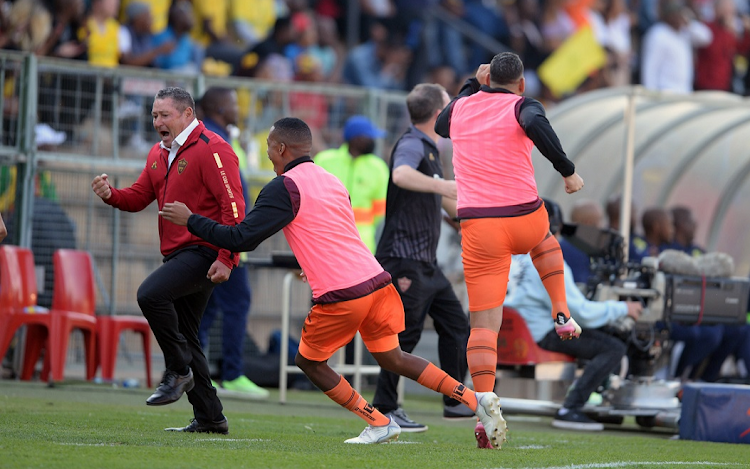 Stellenbosch FC coach Steve Barker celebrates with his players in his side's DStv Premiership win against Mamelodi Sundowns at Tuks Stadium in Pretoria on May 14 2022.
Image: Lefty Shivambu/Gallo Images

Stellenbosch coach Steve Barker praised his players for producing a magnificent performance after they thumped champions Mamelodi Sundowns 3-0 to guarantee a top eight finish on Saturday.

Stellenbosch became only the third team his season after AmaZulu and Maritzburg United to beat Sundowns in the league and they remain on course for a third-place finish that comes with Caf Confederation Cup football.

Stellies pulled off the victory through a brace of goals by attacker Ashley du Preez and a stunner from Jayden Adams as they took advantage of bizarrely chaotic defending by Sundowns.

“We didn’t allow them to be the Sundowns they can be, but you know they have won the league already,” Barker said.

“We probably had more to play for more them, but they are a club built on success and winning is in their DNA. I don’t think they came out not wanting to win the game.

“I think we played the situation well. As you can see they ran out of ideas a bit in the second half by throwing in a lot of attacking players. I wouldn’t say we caught them on a bad day, but I would say we were just too good.”

Barker added that the cornerstone of Stellenbosch's win was the way they defended.

“When you play Sundowns you have to defend well. If you give too much time on the ball to them they get comfortable and they don’t like a team that is in their face and a bit aggressive in defence.

“Any time there was an opportunity to play Du Peez in behind [Downs' defence] we knew his pace will cause them problems, which we did with the two goals.

“Our third goal was a bit of class from our youngster Jayden Adams. After that it was just suffering as a team and I am very proud of the effort. It is not easy to come here in the backyard of Sundowns and beat them three 3-0.

“We started the season very well with 11 games unbeaten. We had a bit of a wobble midway, but we sort of recovered and we are finishing well.

“We have a big derby game next week against Cape Town City, but we have achieved our objective of finishing in the top eight and now we can dream of even finishing higher on the table. It was a magnificent day for us.”

Stellenbosch beat a strangely lethargic Mamelodi Sundowns 3-0 to cement their place in the top eight on the DStv Premiership standings at the Tuks ...
Sport
1 month ago

Sundowns co-coach Rulani Mokwena, who was gracious in defeat, admitted the loss was hard to fathom.

“It is a bitter pill to swallow because we don’t like losing. We are bad losers and we want to be bad losers so that we don’t [get] use to this feeling, it is not a good feeling.

“It is one of those that happen in football — congratulations to Steve Barker. If it has to happen, then I would rather it happens to Stevie Barker because he is an incredible gentleman and servant of the game.

“What a story for him, because it's a lot of the history that he’s made has been on this pitch [when Barker was coach of University of Pretoria FC]. Some of the things are written in the stars — you just have to accept.”

Downs end their campaign against Royal AM at Chatsworth Stadium on Saturday. Stellies' game against City is at Danie Craven Stadium. All Saturday's final-round games, apart from those rescheduled due to Orlando Pirates reaching the Caf Confederation Cup final, will be played at 3pm.

Mamelodi Sundowns co-coach Rulani Mokwena says it’s none of their business what other clubs are doing to catch up with them.
Sport
1 month ago

As they approach the conclusion of another successful domestic campaign, Mamelodi Sundowns coach Rulani Mokwena has given the team full marks on the ...
Sport
1 month ago